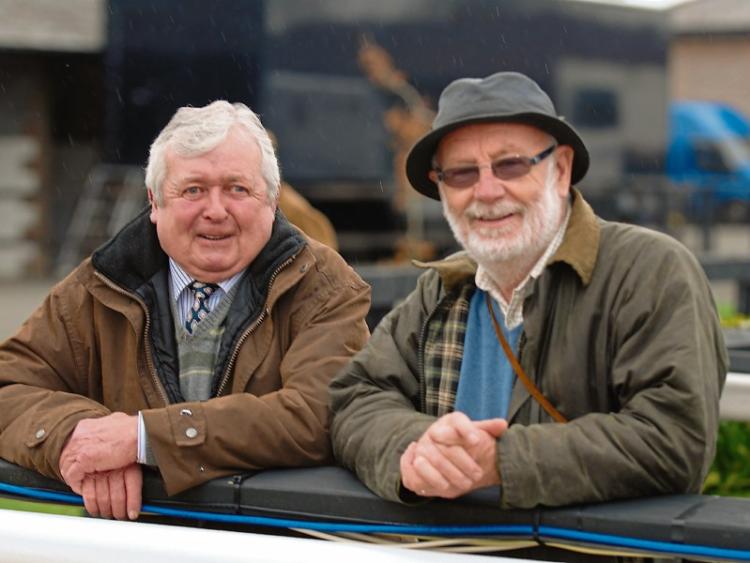 The recent funeral service of the late Percy Donnelly, Ballymore Eustace, encompassed the many facets of his life, his family, friends and neighbours, his community work, love of nature, music and a devilish sense of fun. For Patricia and his daughters Emma and Laura, the speedy end to his life was a shock, all too sudden and traumatic.

Percy’s funeral service was unique, a fitting tribute to a man who reached out to so many. The neighbours at Dowdenstown have an unrivalled relationship — their clean-up days, of which Percy was a driving force, achieved great results. This lot party just as hard — pretty much any excuse is a reason to party! Close neighbours carried Percy’s wicker coffin into the Church along with family.

Ever conscious of protecting the environment, it was a wicker coffin Percy required. His influence with the local Tidy Towns group is legendary and his knowledge of wild grasses and fauna and what would shelter and feed our native birds and insects was renowned. Hence the lovely wild grass bed along the bank at Kimeens and at the River Walk.

Percy was a professional garden landscaper, and had worked for years at the Japanese Gardens in Tully, Co Kildare. Originally from Kildare town, I was surprised to hear that Percy was one of the founding members ofCill Dara Rugby Club in 1965 and played on their first club team — I didn’t have sport amongst his accolades.

It wasn’t a surprise to learn that he met Patricia at an outdoor event — beagling with Kerrs of Bishophill, no less! Patricia had come to live at Dowdenstown in 1980 and met Percy late that year. They didn’t waste time and were married by Christmas 1981 with Emma arriving the following year and Laura in 1985.

He continued his landscaping business but for years, many will remember Patricia and Percy running the bus service to/from Barretstown and also doing the secondary school transport runs. His relationship with the CDA was long term, having supported Ian Coonan in the Neighbourhood Watch Scheme before being the driving force in setting up the Community Text Alert, which has been a vital service since the closure of the Garda Barracks (for the past 10 years, Percy worked with the Tidy Towns volunteers, also a sub-committee of the CDA). The establishment of the text alert scheme involved visiting hundreds of homes in the area, encouraging people to join, and then collecting the subscriptions and keeping proper accounts.

About seven years ago, he and Patricia joined Ballymore Singers and were regulars at the annual Traditional Singing Festival, the couple having a shared passion for music. Like his flowers and plants, Percy preferred the naturally evolved music of our traditional Irish culture. His funeral service encompassed all of these traits.

“We’d like to thank Monsignor Wilson for accommodating Percy’s service,” said Patricia. “A friend of the family, Fr Peter Conaty officiated and welcomed Percy and the attendance to the church for his funeral”.

A local quartet known as DARA comprising of Alice Kelly, Dorly O’Sullivan, Aoife Doyle and Helen Harney played Jesu Joy whilst 9 candles were lit on the altar representing the many aspects of his life, family, music, nature and his work in Barretstown amongst them. Laura’s partner, Donnchadh, then read The Man of Heaven with other readings including The Sky gave me its Heart (read by Emma), Happy are Those and other poignant readings by Emma’s partner Tracy and Patricia’s sister Fidelma.

Neighbours Máire Ní Dhomnaill and Bill Delaney spoke from the heart about their beloved friend and Dowdenstown ally with Máire citing Percy’s ‘boldness’ both as an exotic dancer or in fancy dress at Luggadowden parties but also for his annual April Day’s pranks (nearly causing a provincial crisis one year when Galway and Tipperary flags mysteriously disappeared. The home owners blamed each other, instead of looking at Monsieur Le Messer Percy).

Daughter Laura then spoke of the loving, fun environment their parents had created for the girls, and also for little Phoebe. Bearded Percy, though, also loved playing Santa to the neighbour’s children and was generous in giving out Easter eggs to the students using Donnelly Bus Services.

His friends from Ballymore Singers surrounded the coffin in the church and performed the beautiful Bright Blue Rose and later sang The Parting Glass at St Mary’s Cemetery. Other musical pieces included the haunting melody of the Coolin (performed by Alice Kelly) and The Flowers of Ayoka, a classical piece performed by Derek Barton. As the Parting Glass was sounding, mourners threw fresh flowers onto Percy’s coffin, another touching effort to respect the environment.

“I want to thank my sister Ailish for organising such a beautiful and truly fitting farewell service to Percy, it was flawless. To our neighbours in Dowdenstown and our friends, we couldn’t have gotten through the last few weeks without you. Our thanks also to the staff of Tallaght and Naas Hospitals and Harold’s Cross Hospice”.

God bless Percy, a lovely man, no airs and graces, you were a doer amongst the community or as Máire cited “You were a listener, a fixer, a gardener, a builder….”