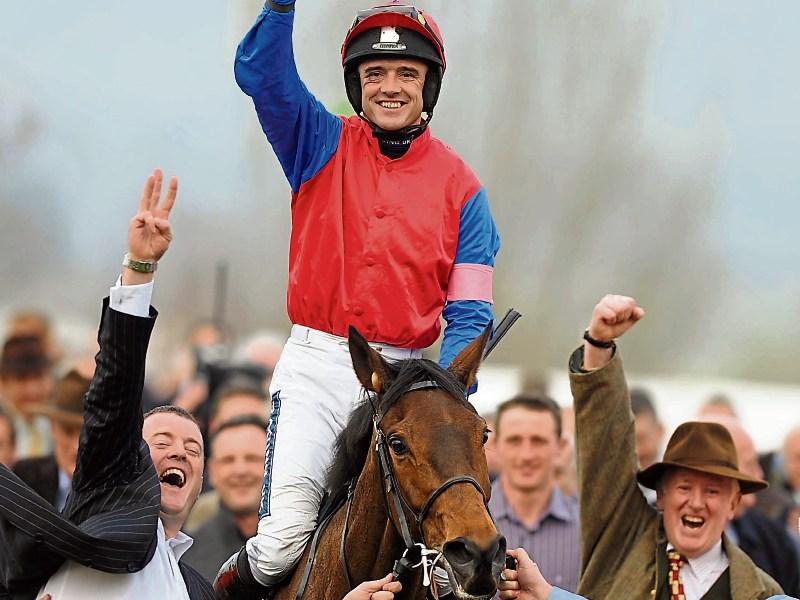 Ruby Walsh celebrating on Quevega at Cheltenham in 2011

I back Ruby when he rode his first Cheltenham winner, Alexander Banquet, in 1998.

Everyone will tell you now they picked Alexander Banquet over the favourite Joe Mac. But trust me, in Bruce’s that afternoon, less than half the proletariat were on board.

I remember it being nothing but smoke and then bad language when Joe Mac fell off the pace on the run in.

The floor was already a graveyard of dockets and enough fag butts to make it look like a mistaken delivery of wood chippings from Gouldings.

By 2010, Ruby had clocked up 24 Festival winners and any local who had backed Joe Mac 12 years previous had been compensated handsomely.

Then, Ruby equalled Pat Taaffe’s record by winning the Mare’s Hurdle on Quevega.

I was in the Winner’s Enclosure for the Irish Post newspaper but heard everyone was on board back home.

We didn’t know what access was when we were seven-years-old. But we had it.

Damien McElroy was a racing correspondent for the Irish Independent and he lived around the back of us in Lakelands.

He was always covering important races and we’d down spuds mid-dinner to see if we could find him on the telly at Cheltenham.

It didn’t matter that Dawn Run had just won the Gold Cup. Or Granville Again the Champion’s Hurdle.

We’d look beyond the horse and jockey to get a glimpse our neighbour, scribbling furiously in the Winner’s Enclosure.

Strangely enough, Brendan Bashfort lived right next door to Damien McElroy and one down from us.

He’d be in and out of Hong Kong with horses.

Occasionally the phone in our hall would ring, the line would be all of a crackle and we’d have to run next door and tell Brendan there was an important message from God knows who in God knows where. Probably Hong Kong.

At Cheltenham in 2014, I met the now bloodstock agent in the Winner’s Enclosure after Quevega won her fifth Mare’s Hurdle in a row.

“Howya neighbour,” he winked. Then he was gone, swept away by the crowd.

I remember the year of Danoli and Tom Foley and watching in the old Powers beside the Paddock.

I knew the regulars by sight, because we were in Powers most Saturdays then, like Marco from the Capri who’d sweep in dressed in that dark blue darts shirt and concentrate on the TV like some forensic scientist.

Everyone backed Danoli that afternoon and there was the feeling of unity in victory, lots of shoulder slapping and copious handshakes.

It was a kinship until Marco returned back behind the counter of the Capri and you were a customer again.

A tip from Ivan Yates

Before Hardy Eustace’s attempt to retain the Champion Hurdle in 2005, Ivan Yates was on the radio advising the Irish Government to lump onto the Dessie Hughes’ trained horse in a bid to solve their budget deficit.

Ireland’s economic problems would be sorted in five minutes, not five years.

His argument was so convincing a friend listening on the way out the Kilcullen Road abruptly turned the car at Two Mile House, sped back and placed the kind of bet that might have plugged a small hole in the budget deficit.

Later, Ivan Yates opened Celtic Bookmakers where the old Powers used to be.

Gill Woodcock does a B&B down the back of the Cheltenham Racecourse.

Kildare connections sorted me a bed in there one year.

I met Joe Byrne from Naas over breakfast in the dining room.

Another year Paul Swan from Sallins took the room.

I bumped into Charlie McCreevey outside the Weigh Room two years ago and Niall Cronin from the Herald inside the Media Room last year.

Robert Mulhern is contracted to RTÉ's Doc On One programme. To contact our columnist, email mulhernrobert@hotmail.com