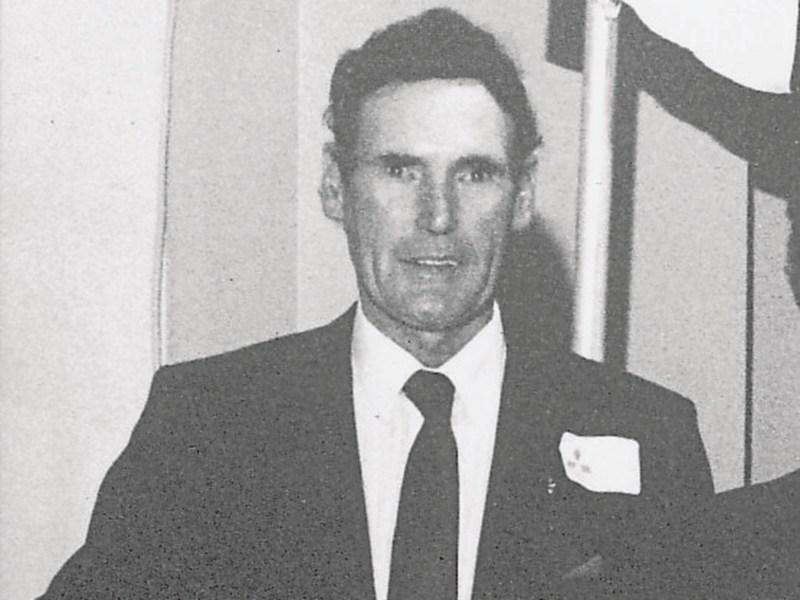 Peter Mooney was born in Eadestown in 1925. A well known sportsman and business person, Peter was a member of the Kildare team that won the Leinster Senior Football Championship final back in 1956, and a very proud member of that team at that.

He liked nothing better than sitting down with former team members discussing that, and many other games, during his Kildare footballing days.

A man with a mighty pair of hands, Peter made short shift of many a defender during his footballing days.

Peter lined out with various clubs throughout his career in both Kildare (Ballymore Eustace and Eadestown) and Dublin including Civil Service and he enjoyed a successful stint with St Finian’s in Newcastle, Co. Dublin where he also won a championship medal in 1949. In fact back in 1999 Peter, along with other surviving members of that Finian’s side, were reunited when the club made a presentation to the players to mark that success.

Well known in the motor trade, Peter began his apprenticeship in McGuirk's Garage in Naas before moving on to Dublin where he finished his time and got involved in various GAA clubs in the city.

He moved to Ballymore Eustace after that and opened a garage but these were tough times and that venture did not last; he moved on to work in Burke Bros, Kildare, with the late Mick Leavy and also worked for a few months in McLoughlin’s of Newbridge, always with the intention of opening his own business which he did in Eyre Street, Newbridge, with the late Ray O’Brien, before branching out on his own a while later.

Mooney’s Garage still operates in Eyre Street, Newbridge, to this day, where Peter’s nephews, Richie along with Pat and John run the successful business. Peter retired in or around 1985.

He was married to Breeda, who describes Peter as “a very good husband, a decent and caring man who was exceptionally good to his nieces and nephews, especially after his brother Jack, and his sister Marie, both passed away young, leaving young families.” Peter had many hobbies and loved nothing better than ballroom dancing, along with golf, racing and of course GAA.

A keen golfer, Peter's exploits when teaming up with the late Mick Finlay to compete in the Owen O’Brien Foursomes at the Curragh were legendary and saw them upset many a fancied team, and while they were never declared outright winners, they did succeed, one year, in reaching the final where they were described as a ‘well oiled team’ a description that brought much pleasure to both as they delighted in the craic and banter at the 19th hole for many a day after that.

Peter passed away on November 13, 2016, in his 92nd year and is very sadly missed by his wife Breeda, sisters Jenny, Marie and Marcella; nieces, nephews, relatives, neighbours and a big circle of friends.