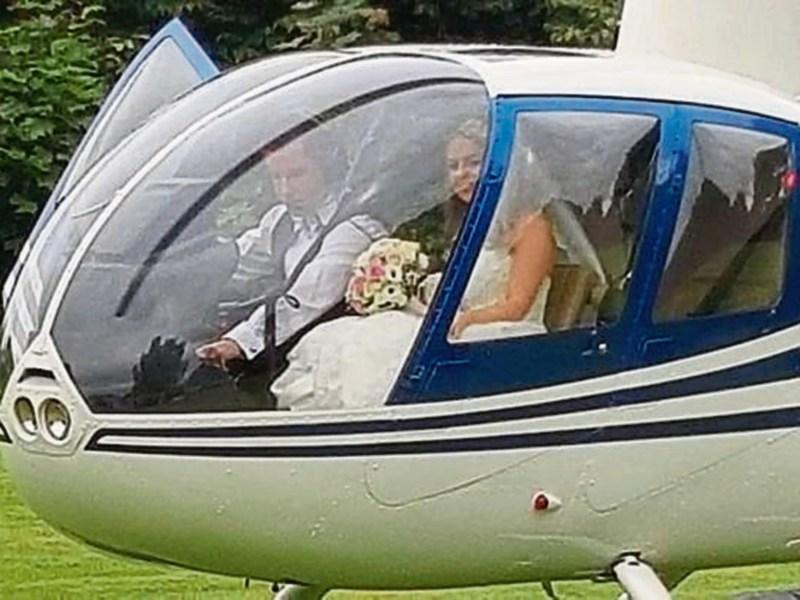 Newlyweds Eoin Roche and Shauna Kavanagh made an unusual entrance to their recent wedding reception at Hotel Keadeen.

Eschewing the traditional limo or horse-drawn carriage, helicopter pilot Eoin flew his new bride from the church in Kilcullen to the Newbridge hotel, landing on its front lawn to the delight of guests and staff.

Eoin hit the headlines back in 2003 when he became the country’s youngest qualified helicopter pilot at the age of just 16.

He originally planned for a friend to pilot himself and his new bride to the reception, but then thought “I work as a helicopter pilot, so why not fly myself?”

Shauna, who is from Kilcullen with Donegal roots, arrived by car for the Friday, August 12, ceremony at St Brigid’s Church in Kilcullen.

The happy couple afterwards took off from a friend’s house nearby, where the groom had parked the chopper before the wedding Mass.

According to Eoin, it was the first time for several years that a helicopter had landed on the Keadeen lawn.

“The guests loved it, everyone was out front to see us land. It was hard to beat!” he said.

Eoin, the son of Gerry and Annette Roche from Kilmeade, met Shauna, the daughter of Patrick Kavanagh and Patricia Shortt, through friends.

While the prospect of a breezy helicopter journey playing havoc with a wedding dress and hairstyle might phase many a bride, Eoin said his new wife was “happy enough” at her unusual arrival at the wedding reception.

“She is easygoing!” he laughed.

The couple plans to honeymoon in Sorrento.