On the road with Big Red 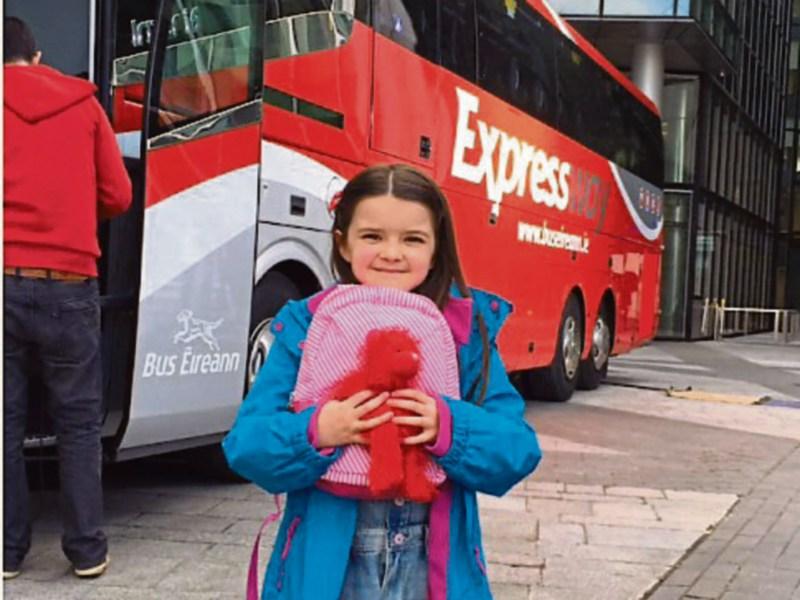 A young Clane girl is playing a lead role in an new transport advert.

Isabel Connolly (7) , who lives with her sister, Ruby (4), and parents, Mandy and Peter on the Kilcock road is the starring in the new Expressway advert.

Along with Big Red, Isabel will be the face which greets thousands of customers of the Bus Eireann services marketed as Expressway.

The company has allocated a budget of almost €500,000 for the campaign.

So where did it all begin for the seven year old?

Her mother, Mandy, who runs her own craft business from home, Izubee, met Isabel’s dad, Peter, in the UK, where Isabel was born. Peter, an accountant with EMC, is a native of Clane. The couple made the move to Clane four years ago

It became apparent early on that Isabel, who will be going into second class at Scoil Bhride next September, liked the stage. When she was two she would put on a show and had no nerves, explained Mandy. When she turned four she joined the hip hop classes run by Vicki Barry in Clane.

Then came a lead role as King Louis in the Jungle Book and another impressive run as the Artful Dodger in Oliver. “Her accent was very handy,” said Mandy.

Two years ago, Maria Barry, sister of Vicki, started a talent agency and Isabel was very much on the horizon. That led to Isobel and Ruby appearing in a short five minute slot on RTE Junior just before Christmas.

They reached the last three for auditions for a Vodafone ad and Isabel was the final selection for the Expressway advert after working through the Ali Coffey agency. The first audition was last April and by the end of the month Mandy and Peter got word she had been selected.

Filming took part in mid May. Isabel got permission to miss two days at school. The schedule saw to that. It was a learning curve for the family.

At one point during filming, Isabel was strapped onto the back of a lorry. “They closed off two junctions of the motorway in Wicklow.”

The advert was directed by LA-based Irish director, John Moore, a native of Dundalk. He has been involved in Behind Enemy Lines and Die Hard 5, with Bruce Willis, among other productions.

Moore was impressed with Isabel. “He told me that she takes instructions so easily and quickly,” said Mandy. “He urged us to give her every chance to nurture her talents.”

Apart from her acting, Isabel learns piano and does sports and gymnastics.

Vicki Barry also said that John Moore was very impressed with Isabel's acting ability and believes she could have a bright future ahead in acting. Isabel attends Vicki's classes in Clane and is trained in drama, singing and dance.

Vicky said Isabel is not the first of her students to reach these heights. Chloe Wiltshire (Bord na Mona) and Lucy Anna, Julia and Polly Fenton (Eir) also starred in TV ads. Another student, Aimee Ryan, starred in a vampire movie which was screened at the Transylvania film festival.