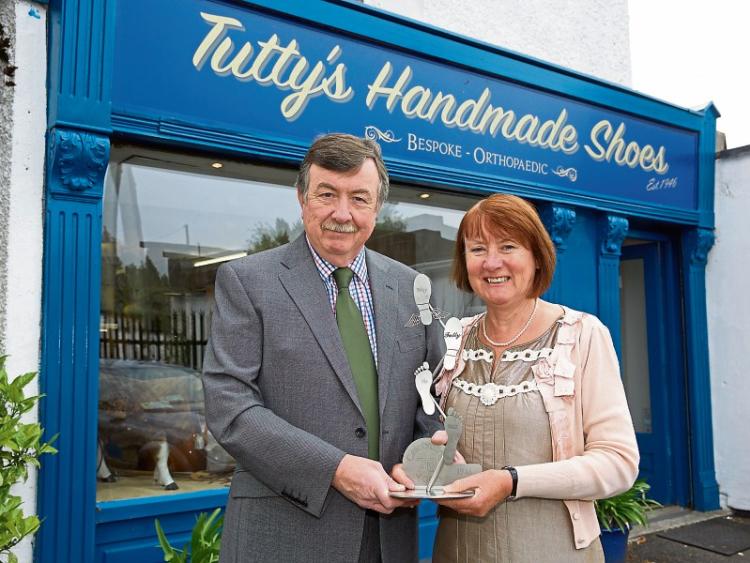 George and Marian Tutty, pictured at Millbrook, Naas, where the business is now based

One of the oldest enterprises in Naas has celebrated its 70th anniversary recently.

George Tutty launched a retail footwear shop at 7 Poplar Square, Naas, in November 1946. From there he began his handmade shoes business, taking customer measurement in a small office in the shop.

The business went from strength to strength and George then bought the premises across the road, known as Hanlon’s yard and set up a factory, employing up to 12 people.

Over the years he made shoes for many people including the late President of Ireland Sean T O’Kelly, Pres. Patrick Hill, former Taoiseach Garret Fitzgerald, actor Larry Hagman (best known for playing JR in the TV series Dallas) as well as many well known people in the horseracing world. The business featured in Hands, an award winning series of television documentaries about Irish crafts, in 1979.

Shortly afterwards George retired, handing the business over to sons Edward and George.

Edward relocated the business initially to a new factory on Friary Road and then to its current location in Millbrook, just a short distance away.

Edward retired in October 2005 and George took over the enterprise along with his wife Marion, carrying on the legacy of “making shoes the Tutty way”, as started in 1946 by George and Nellie Tutty.

The Tutty family recently celebrated 70 years of continued business at the Falls Hotel in Ennistymon, where George Snr originally learned the wonderful craft of shoemaking in Walls on the main street of the West Clare town.