Special feature: Swapping China for a life in Newbridge 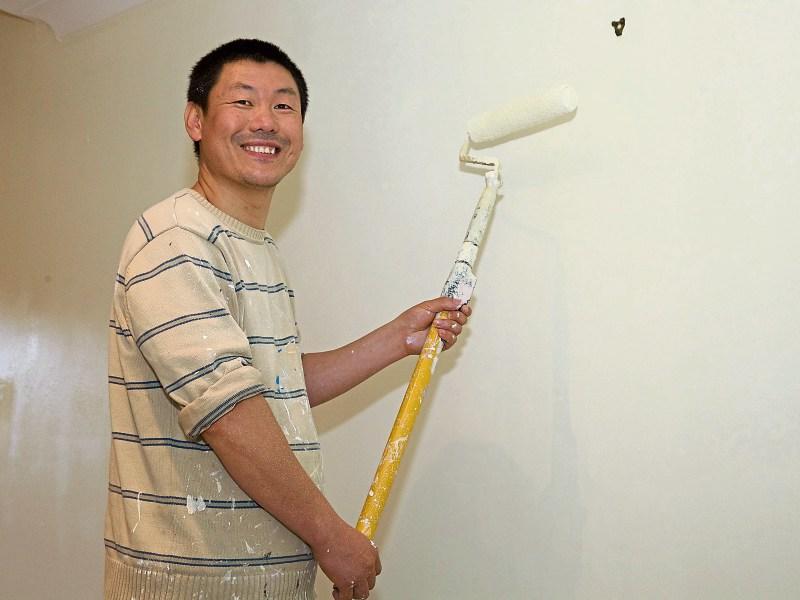 Nick Ren Bao Qiang has his own painting and decorating business as well as a job at Comerfords. Photo: Tony Keane

Craggy Island may have had it’s own Chinese colony but Newbridge has attracted it's own contingent of newcomers from the Far East.

Although the Fr Ted sitcom may have poked fun at the idea of Ireland being racist, Nick Ren Boa Qiang describes Irish people as very welcoming and friendly.

Sixteen years ago, Nick left his home in the Ji Lin Yan Bian province near the North Korean border for the plains of Kildare.

More Chinese workers have arrived over the years and Newbridge now has a growing Chinese population.

Sitting in the cosy setting of the Keadeen Hotel as the rain starts to fall, the damp weather does little to phase this 38-year-old man. His beaming smile, good humour and can do attitude is reflected in his work ethic.

Sitting beside his friend and former boss, Cllr Paddy Kennedy, the local politician recalls how he first met Nick when he and three of his countrymen came to work with him at his leaflet distribution business.

After an initial four-year stint at Lidl, Nick also spent time working with Liam Johnson on the buildings, block laying and snagging.

“I loved that. Liam Johnson was very good to me. I would have loved to continue working there,” he said.

Alas, the boom ground to a halt hitting the trade hard and building work got scarce.

That didn't stop Nick, he is now working three days a week with Comerfords’ bakery and has set up a painting and decorating business for his remaining time. Paddy also points out he will be taking over his leaflet business.

“I qualified as a teacher in China but back then I would only have got the equivalent of €200 a month,” Nick says.

He recalls coming to Newbridge all those years ago.

“It was a big difference. I was living in Ballymany and I got lost all the time because all the houses looked the same and it was raining all the time.”

Another problem was understanding signs. He recalls how he had to ask which was the ladies and which was the gents notices on toilets.

He points out things have also changed in China with both wages and the cost of living increasing five fold.

Two years ago Nick got married to his wife, Fu Hong Yan and with the help of Cllr Kennedy, she now has a visa. He points out that this type of visa does not entitle the qualified hairdresser to work and she will have to apply for an upgrade. Paddy explains the visa process is quite complicated.

According to the latest census in 2011 there were 5,431 Chinese people living in Ireland but the precise figure for Kildare was not detailed. There were 34,764 non nationals living in the county, although it is unclear how many came from China.

Nick says most of the people who came to Newbridge stayed but one or two returned to China. Others have gone on to settle here and raise families.

“Everybody knows Nick in Newbridge. He helps out with the St Patrick's Day parade every year organising the floats at Tesco,” says Paddy.

Cllr Kennedy was involved with the Chinese Irish Cultural Academy (CICA) for 10 years and apart from liaising with the Chinese community he has been pushing for increased links between the two countries. CICA also opened an orphanage in Chengdu, which was hit by an earthquake in 2008.

On Monday May 16, Paddy signed an economic, social and business link memorandum of understanding on behalf of Kildare County Council with officials from the Guangdong province.

“This agreement is a positive start. We will form a committee together for the next four years with at least two members from each MD that will look at all the possibilities,” he added.

He points out the delegation were very interested in Irish IT, food, agriculture and companies like Kerry Group.

“Chinese people are very honourable and protocol is very important for them. The previous ambassador told me that two years ago he was going to visit the Mayor of New York. The Mayor’s staff told him the red flowers in his residence were red, but in China red flowers are used for funerals so he had all the flowers sprayed with white paint. The ambassador was very impressed,” he recalls.