Kieran Whelan was just 47 when he had a stroke 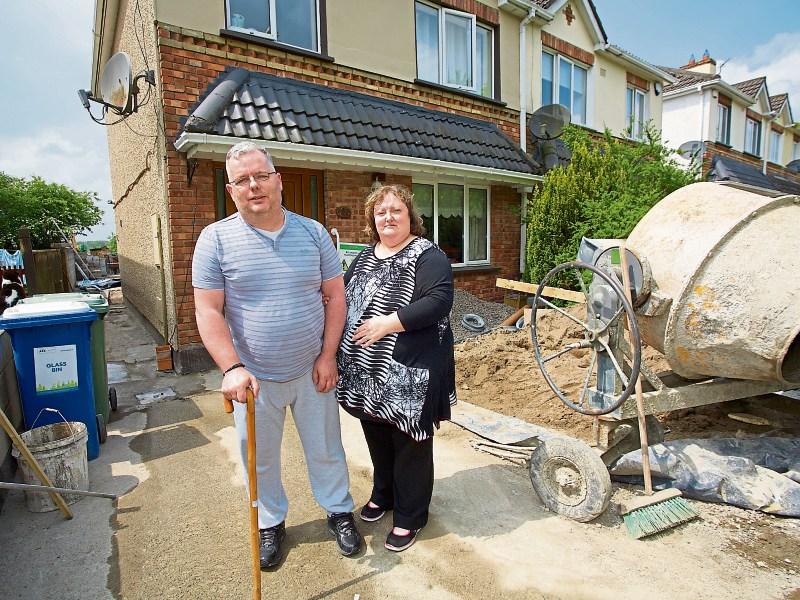 Kieran and Denise Whelan at their home in Rathcurragh, Newbridge. Photo: Tony Keane

A Newbridge family have launched a campaign to raise funds to adapt their home for their dad, who has been badly affected by stroke.

“On Easter Sunday last year, my dad had a stroke. He was 47. Since then, he has been struggling. He has gone through months and months of physiotherapy, speech therapy, counselling. Basically complete rehabilitation. He has come a very long way, and struggles daily,” said Kieran Whelan’s daughter, Ciara.

The council have approved a €30,000 grant to build a new bedroom and wet room for the former Highfield man. However the family have embarked on a fundraising drive to raise the extra €11,200 required to modify their home in Rathcurragh. A special gig was held last Friday night in Judge Roy Beans and a go fund me account has also been set up.

“His life is very limited due to the lasting effects of the stroke. He has paralysis on his left side, which makes things that we able-bodied people take completely for granted virtually impossible. He can’t wash himself without my mam’s help,” explained Ciara.

” He can’t walk without the aid of a leg splint and a walking stick or rollator. Because of this, he has no access to the first floor of the house.”

The new bedroom must be wheelchair accessible, and also needs to have a wet room attached with specially adapted shower seats, toilets, rails and other equipment.

At present the dad of three has to sleep in the sitting room of his home at Rathcurragh on the Green Road. He can’t work because of the after effects from the stroke.

His wife Denise said: “It is brilliant to get the council grant but like many other people, we are not in a position to borrow the extra money to complete the build.”

She said she knew of another couple who were also trying to raise money to put in a stairlift after the man returned home from hospital.

Ciara pointed out the work has to be completed on the build within six months or the family may lose the council grant.

“It would mean an incredible amount to my dad to be able to have this new room. It would give him a sense of dignity, comfort and independence. It would change his life completely,” she said.

“We are grateful for any donation, big or small. Any amount will go a long way in helping to get this build on underway.”

The family said that if the target is surpassed, any remaining donations would be given to a local charity which helps those recovering from stokes.

“It would be just fantastic for Kieran to have proper facilities. You take the simple things for granted like being able to go to the bathroom and wash your face, wash your teeth. This would make such a difference to his life,” said Denise.

If you want to contribute, log on to https://www.gofundme.com/rtrkieranscrib.