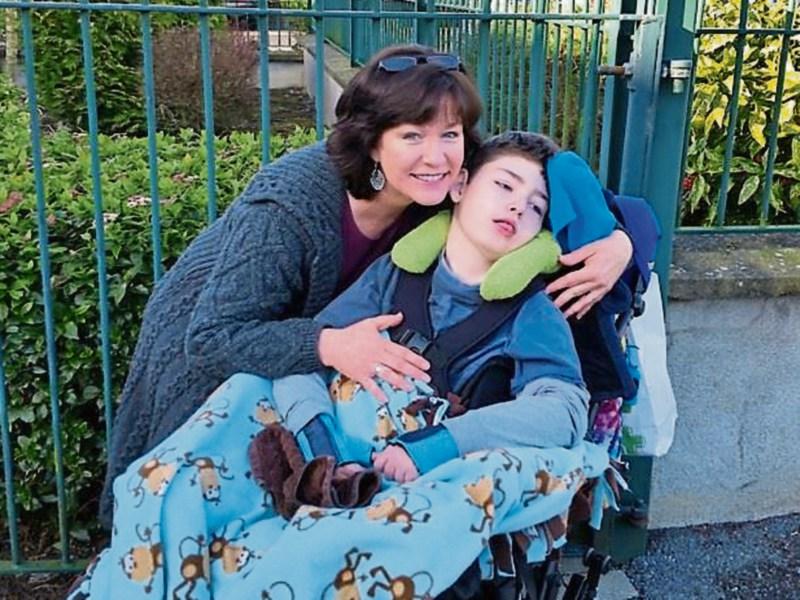 Tracy McGinnis and her son Brendan

”Let’s put it this way, he’s in a palliative hospice. I know that any day could be the day.”

They’re the heartbreaking words of Ticknevin woman Tracy McGinnis who is a full time carer for her oldest son Brendan, who was born with Congential CMV.

Normally having the condition known as CMV, or Cytomegalovirus, in healthy adults does not cause any symptoms, unless they have a weakened immune system.

However, if a pregnant woman contracts the virus she can pass it to her unborn child, which is an altogether more serious matter.

In Tracy’s case, she was working in her native US (she’s from Arizona originally) as a counsellor with young children, a hotbed of infections, and believes she may be picked it up in the first trimester of her prengancy.

After Brendan’s birth, she spent almost eight years, from 2007, establishing and running a foundation to promote awareness of CMV in the US.

Today, she is now living with her partner and their sons Declan (7) andBrendan (now 12) in Ticknevin, near Carbury, where she says it’s quiet apart from the odd cow.

Brendan is non-verbal, has a very serious and complicated version of epilepsy, has osteoporosis, scoliosis, is significantly cognitively impared, has regular lung infections and cannot hold his head up for more than 20 seconds at a time.

In recent times he has become intolerant to feeding and is now on a feeding pump which needs to be switched on and off during the night.

There’s a reason that her poignant and beautifully written blog is called transitioningangels.com

Tracy knows that Brendan’s long term prognosis is not good. “Let’s put it this way he’s in palliative hospice. I know that any day could be the day.”

“We almost lost him during a bout of pneumonia,” she says.

It is utterly needless to say, but worth saying anyway, the future of healthcare forchildren in Ireland matters greatly to her.

And the recent decision to locate the new children’s hospital at St. James rather than in Blanchardstown has exercised her greatly.

She’s part of a group of mothers called Extra Special Kids who are campaigning for a reveral of that decision.

There are several good arguments against St. James, but what hit home for her, in particular was a suggestion that Luas would be a good mode of transport for people getting there.

“It’s hard to see how you’re supposed to do that with somebody who is wheelchair bound, vomiting, seizuring, I’m like a small hospital.

“You can’t do that on the Luas.

“How am I going to do that from Ticknevin anyway?”

“Even if I lost Brendan tomorrow, I’d still fight for this,” she adds.

“Outcomes can’t improve if they don’t have maternity hospital co-located.

At St James there is no room for future expansion and there is poor air quality.

Traffic into city centre will create tremendous delays for emergency services and there are restrictions there for helicopter flight.”

And she noted there is a saving of €200 million to be made by choosing Connolly over St James.

“It’s a greenfield site so easier, cheaper and faster to build.

“They could flip the sites. Put the satellite hospital at St.James and the NCH at Connolly.

“There will be much easier access off the M50 coming from north, south, east and west.”

An argument put forward in favour of St James’s Hospital is that a large number of the medical professionals want it there.

But she believes that that view has been misrepresented. She is aware of some medics who say the opposite.

“When it comes to children’s lives it has to be stopped — it all boils down to that,” she said.

Extra Special Kids is considering the possibilty of appealing the recent decision to build the hospital at St. James.

A decision by An Bord Pleanala can be appealed to the High Court, and that is where she believes this is headed.