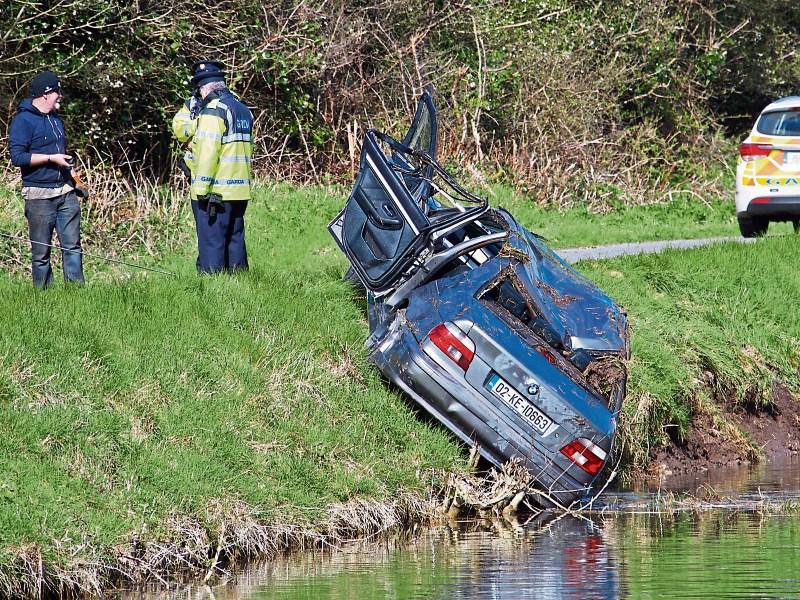 The of the crash near Allenwood on Wednesday, April 27

A dad of two tragically died last week when his car plunged into the canal near Allenwood.

A huge crowd turned out at Derrinturn Church on Saturday April 30 to pay their last respects to 35 year-old Michael (Micky) McManus.

The Killina man was well liked and had many friends. He worked with his father in the fuel merchant business and friends described him as being “good with his hands” and into machinery and mechanics.

“Everybody was stunned and shocked by his death,” said local parish priest Fr John Fitzpatrick.

“He comes from a well-known, respected local family in the community. It’s very sad.”

The church was packed to capacity as the local community gathered together to support the McManus family.

As a mark of respect to his relatives following the tragic death, Carbury GAA cancelled football for beginners training for the week.

He reposed at his parents’ residence in Killina from 7pm on Thursday April 28.

On Saturday he was taken to Derrinturn Church for 2pm funeral mass, followed by burial in the adjoining cemetery.

Micky’s car was discovered shortly before 6am on Wednesday morning, April 27, by a person on their way to work.

Shocked locals came across the scene as day broke and word spread.

The emergency services and the gardai were called. The car was overturned and had entered the Grand Canal at Allenwood South, not far from Micky’s home in Killina. He was pronounced dead at the scene and taken to Naas Hospital.

The road was closed for a short time as the car was removed from the canal.