There's more to Junk than rubbish 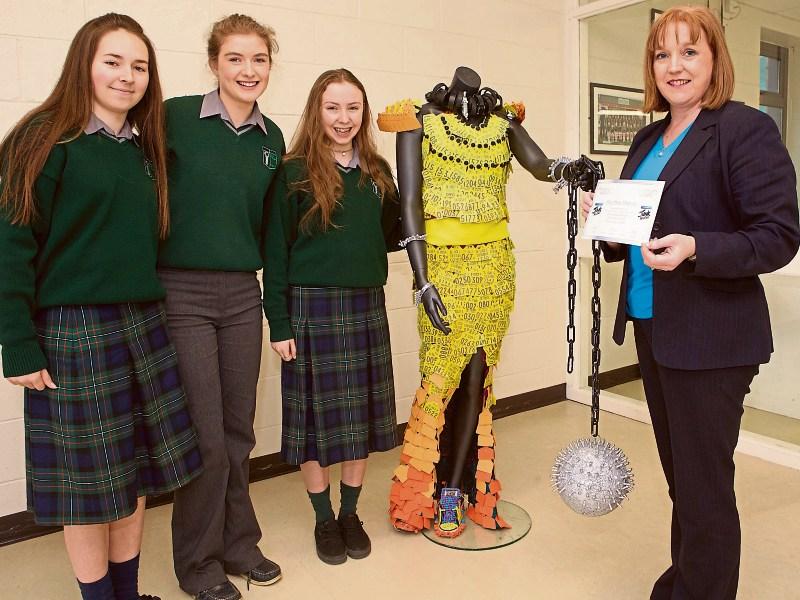 Four students at Clane’s Scoil Mhuire have reach the regional final of a fashion and art competition for
secondary schools.

On February 10, the Bank of Ireland today announced the regional finalists for the Junk Kouture 2016, it sponsors.

Student designers Megan Colville(model), Anna O’Flaherty and Molly Nason from Scoil Mhuire Clane in Kildare entered this year with their entry, ‘#Not Like The Udders’.

They won a Silver Ticket which secures them a place in the Eastern Regional Final taking place on March 9 2016 for their entry.

The competition is now in its sixth year and is a major event in on the school fashion and art scene.

Basically it encourages students to create unique, original and innovative outfits from recycled materials and junk.

Bank of Ireland said the competition is open to students nationwide, entries for 2016 surpassed all expectations making it the biggest competition to date.

Most Regional finalists will be presented with a precious Silver Ticket at their respective Finals in at The Helix.

Some regional winners received a surprise visit from the Bank of Ireland Junk Kouture team who were on the road last week.

If they reach the final it will take place on April 14 at the 3 Arena.

Exciting times for them.