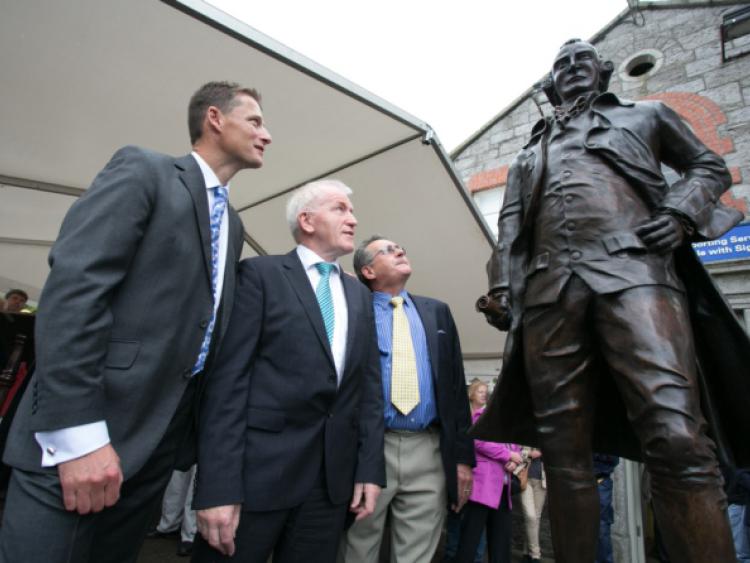 Celbridge’s most famous citizen, the late businessman, Arthur Guinness, arrived back home on 2 October, in a manner of speaking.

Celbridge’s most famous citizen, the late businessman, Arthur Guinness, arrived back home on 2 October, in a manner of speaking.

The statue is the brainchild of Celbridge Tidy Towns Association, whose chairperson, Michael Connolly, welcomed and thanke everyone involve. The cost, paid by Diageo, the company which owns, Guinness, is in the region of €30,000.

Arthur, who lived in Celbridge during his early years, is now destined to stay longer.

But it will be up the Tidy Town Association to insure it for damage or liability. Diageo will not be looking after that.

The sculptor is Celbridge resident, Jarlath Daly, praised by the Minister for his All Star awards.

The Guinness family were well represented, including Gareth Brown, who likened Arthur’s face to “an Austrian general who had lost his horse.” Patrick Guinness wished the town well with any marketing plans. He also said the family had not built any statue to a Guinness itself, others having done so in the past.

David Smith, Diageo, pointed to its continuing the Guinness tradition of social support.

He presented a small medallion to the Minister, who thanked the company for helping make up deficits in Government spending, including €200,000 to 72 projects associated with staff.

Mr. Deenihan wished welcomed the setting up of a Guinness trail, plans for which are continuing.

Mr. Connolly said there had been much debate over how to face the statue. “We thought it would have to be revolving,” he joked.