From the Leinster Leader archives: The evil of ‘pitch and toss’ gambling

The evils of gambling were worrying readers back in 1945 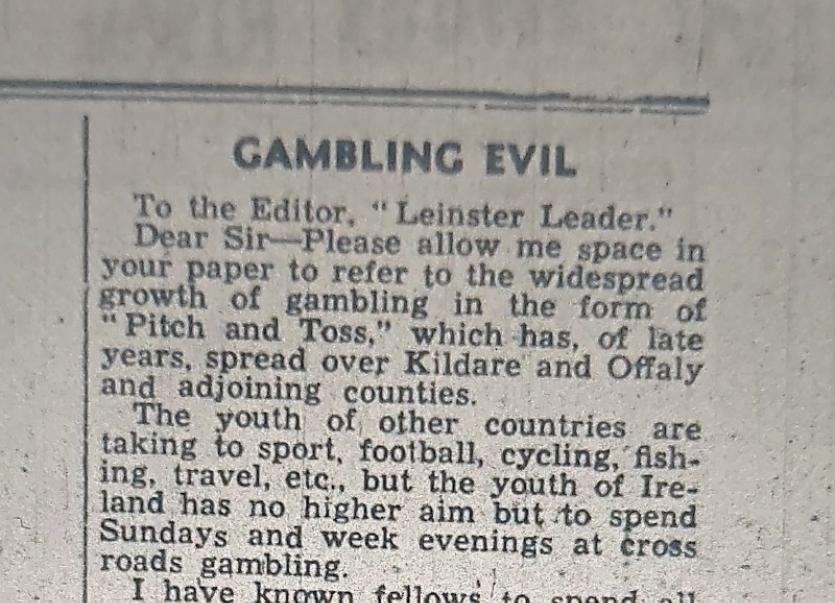 The letter sent to the editor about 'Gambling Evil'

Please allow me space in your paper to refer to the widespread growth of gambling in the form of ‘Pitch and Toss’, which has, of late years, spread over Kildare and Offaly and adjoining counties, stated a letter signed by ‘The Onlooker’ published in the Leinster Leader on January 6, 1945.

The youth of other countries are taking to sport, football, cycling, fishing, travel, etc, but the youth of Ireland has no higher aim but to spend Sundays and week evenings at cross roads gambling.

I have known fellows to spend all Sunday from Mass time at it. As a matter of fact, ‘Pitch and Toss’ is to blame for the bad show put up by some GAA clubs as their members would not attend practice but spend their Sundays gambling.

It is also to blame for bad attendance at LDF parades in places.

It is fast becoming the curse of rural districts as men lose their pay at it. Indeed, it has been known for men to lose their whole week’s pay in a few hours tossing.

It speaks very bad for this country when any foreign visitor passes and sees the men of Ireland spending their time and money at such a foolish pastime.

Surely it is not for an Ireland of this sort that Pearse died.

It is a wonder that the Government does not make this form of gambling illegal, especially as it is an obstruction to traffic on public roads.