Subject or subtext: And then F10 to change to black and covers both stories at top 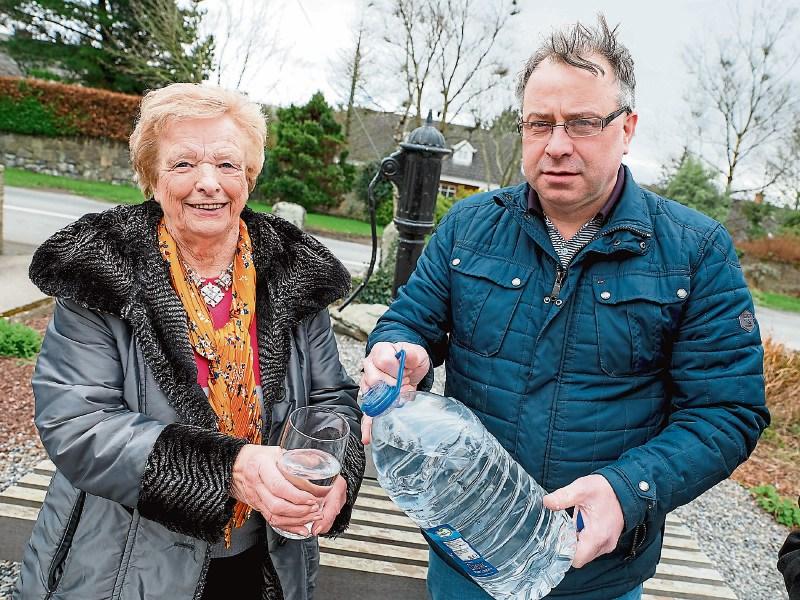 There are fears that a contaminated public water supply near Naas will cause residents to become seriously ill.

The supply serving a group of people in Kilteel has been shown to contain dangerous levels of arsenic and people have been told not to consume it — though it is safe for washing and toilet flushing. It cannot be made safe by boiling.

All of those affected are part of a group water scheme, which provides water from a privately owned supply, which has been in use for almost 60 years.

Local councillor Fintan Brett has called on the authorities to deploy water tankers to provide a safe and accessible supply for local families affected .

Cllr Brett believes that in the medium to long term it will be necessary to connect these homes to the public supply and this is likely to be expensive since some residences are located up to three kilometres from the nearest mains source.

Cllr Brett wants Kildare County Council and Irish Water to join forces to come up with a solution but IW says it has no responsibility for group schemes. “Some older people are depending on neighbours for water,” said Cllr Brett.

A tanker providing 3,000 litres of water would cost around €1,000 a week but it cannot be used because of safety fears raised by Kildare County Council. According to KCC it would be necessary to boil the water coming from the tanker anyway.

Eddie Grainger, a member of the local committee which manages the scheme, said that he is concerned that people may be poisoned.

“There are a lot of elderly people on the scheme and some people may be consuming the water. After all, you automatically go to the tap to fill up the kettle,” said Mr Grainger.

He believes that it is possible to set up a treatment system which will render the arsenic harmless before the water goes into houses.

He said the scheme was set up by local people and has served the community very well.

“We believe that the water can be treated at source and we’ve had a meeting about this but any solution will have to be cleared by the county council,” said Mr Grainger.

“We’re also working to get mains water supplied but this is a long term solution at this stage. It’s not acceptable for this to go on for a few years. It’s very concerning and it’s not easy for a group of 10 volunteers to deal with it.”

The water is tested for quality three to four times a year and a worrying amount of arsenic was detected at the end of November when the level present was almost 50% above the acceptable limit, prompting a ban on consumption to be issued by the council.

Some 60 homes are affected. Mr Grainger said while KCC is communicating with the community “Irish Water don’t want to know.”

He also said IW won’t pay for tankers and KCC does not support using tankers. IW said it doesn't have responsibility for private schemes.

“We’re disappointed with this because we've limited funds. If the weather got bad we’d be really snookered in terms of sourcing safe water.”

Another committee member, Shay McCormack, said that the community was surprised when the level of arsenic, measured in parts per billion, rose from 10 to 14.

Arsenic is naturally occurring and it enters the supply as the spring water ruins through limestone.

“It will be in many water sources but at very low levels,” said Mr McCormack.

“We’re getting great support from Kildare County Council and the body which represents voluntary group schemes.”

He added: “This is quite unusual but not unknown and it could disappear in six months. Otherwise the water quality is very good”

In the meantime the suppliers of filtration schemes are to be approached in the search for a solution. “We're engaging with local politicians to help us and there is good community support. All of the scheme members are understanding but we need to get a solution in place.”

The National Federation of Group Water Schemes is the representative body for schemes across Ireland.

Barry Deane, chief executive officer, said the organisation has come across very few cases of arsenic contamination. “Its occurrence is very limited and we’ve seen very few incidents of it.”

He also said there is a good relationship between the scheme committee and KCC, which is the supervisory authority for these in County Kildare.

Mr Deane said that an expert opinion is likely to come up with the best solution to the contamination issue and said the NFGWS will continue to help the Kilteel community.

There are 380 schemes across Ireland providing water for some 200,000 people.

However, at five, the number of schemes in County Kildare is quite small. These five schemes bring water to over 2,000 people.