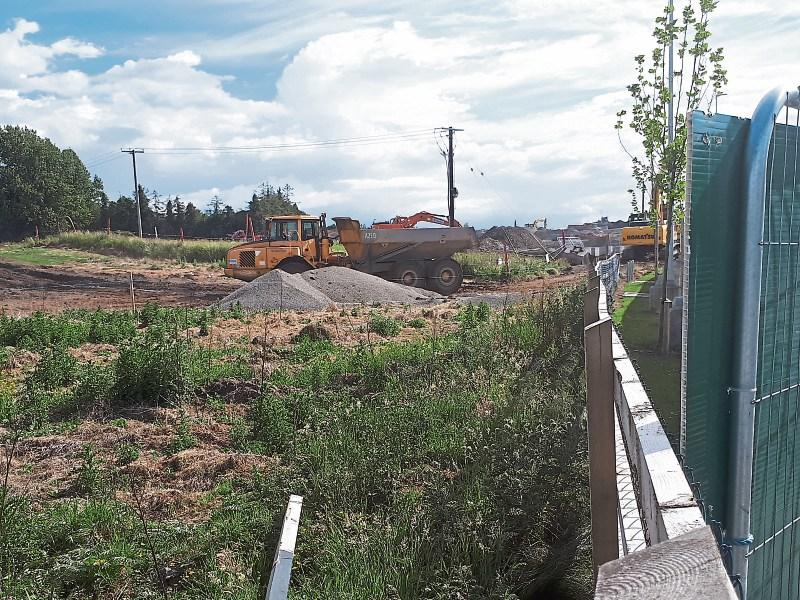 Work on a new development of houses at Devoy Road, Naas. There is a separate proposal for 152 apartments beside this

Kildare county councillors voted by a narrowest of margins in favour of a variation of the County Development Plan, which runs until 2023.

The variation, drafted by Kildare County Council officials, seeks to address the concerns of many councillors who fear that in many built up parts of the county infrastructure like roads, bridges, schools and even creches have not kept pace with the rate of the development of houses and apartments.

KCC put forward the variation to incorporate regional and national planning policy as part of the CDP.

All of the Fianna Fail councillors, whose party has traditionally been supportive of development, opposed the variation.  Cllr Rob Power criticised the proposal to vary the plan, saying it made little sense in the midst of a housing crisis.

Fianna Fail has 13 members on KCC and it’s the largest of the parties on the council.

There has been a good deal of criticism of the growing number of houses and apartments which has led to increasing congestion in many towns. A plan to provide a ring road connecting Dublin road with Blessington Road in Naas was defeated after an intensive campaign of opposition by residents, particularly those living in The Gallops.

It is difficult to secure a first  primary school place in Naas for example and most of the second level schools are at capacity.

The same applies to sports clubs.

Naas GAA club, one of the biggest in the country outside Dublin,  had to use playing fields outside the club in Monread Park and a pitch coordinator allocates training slots to the club’s 80 plus teams.

In January 2019, then councillor Darren Scully said the provision of schools, play parks, roads and community is not keeping pace with the increasing population.

He criticised an arrangement which allows An Bord Pleanála decide on larger housing developments - of 100 units or more -rather than Kildare County Council.

Social Democrat councillor Bill Clear welcomed the vote noting that it does not reduce any permissions granted, but not yet commenced.

He said adequate land has been zoned for residential development and adequate permissions have been granted.

“We have to learn the lessons of what happened before. Unlimited housing is not going to serve us well.”

Cllr Aidan Farrelly said the variation offered councillors an opportunity “to oppose the housing-first, infrastructure-last policy that has failed our communities until now.”

Green Party councillor Vincent P Martin has said that investment in infrastructure has lagged behind housing in County Kildare but this proposal will put people first before development.