The old sweet shops of Naas and Newbridge 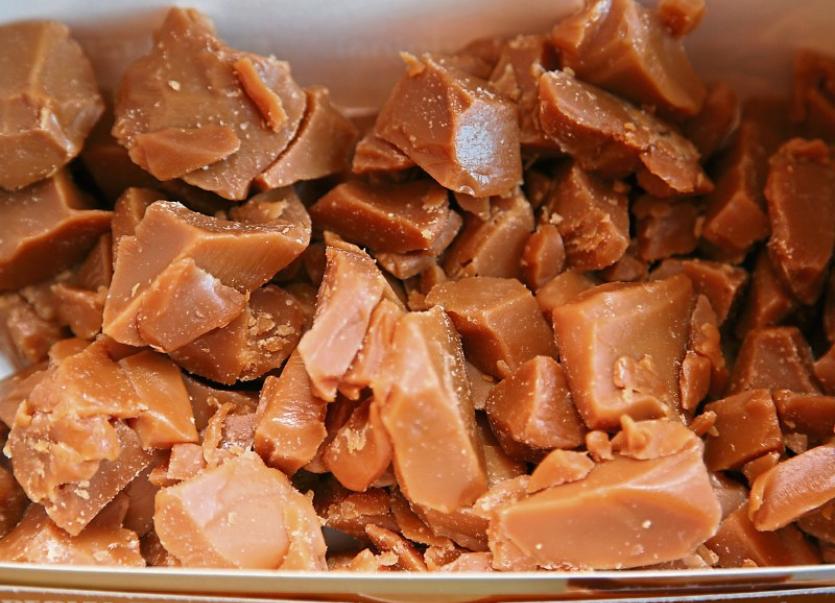 Toffee used to be bought from a slab, Sarah Flood had the most generous measurements, Jack Plant was more exact

There may be a body of opinion out there that suggests the town of Naas stands all alone when it comes to businesses closing on the Main Street.

Nothing, unfortunately, could be further from the truth.

There is hardly a town or village throughout the land that has not suffered similar fate.

A walk from the top to the bottom of Newbridge tells a tale very similar to the county town.

And Newbridge, unlike Naas,  does not have the excuse that a three-quarter built Town Centre is holding it back.

The smaller-type shops probably are the units that suffer the hardest.

A small, specialised sweet shop was one which closed its doors in Newbridge last year.

Ah sweet shops … and the mind goes on one of its rambling trails.

Joe Kearns’ shop on the Main Street was the king of the sweet shops in Newbridge.Rows and rows of screw top jars stuffed with a  variety of sweets from bullseyes to toffees, from aniseed balls (or as we called them Nancy Balls) to bon bons and marshmallows; not forgetting the honey bees, conversation lozenges and the popular fizzy bags. Joe was your only man.

Back over in the county town we had a fair variety of similar type shops.

On the Kilcullen Road probably the most famous of them all was Sarah Flood’s.

Sarah was one of those ladies who rarely changed; always the same hair ‘style’; never seemed to age and was never seen in anything but the cross-over apron.

But she had the best slab (toffee) in town.

And one thing about Sarah Flood’s was when you were buying slab she didn’t break it into exact squares, she would give the block of slab a few bangs off the counter and if you were anyway in luck you’d get a lot more than the one or two pence worth that you were entitled to.

Sarah, of course, had ready-made customers with the CBS just across the road.

Sarah sold Woodbines (the ones with no socks) in ones or twos, supplied a light and even allowed you go into the room off the shop where you could puff away to your heart’s content (not of course that I ever availed of such luxuries).

Down in New Row was a similar type of shop … but very different.

Now there’s a name that would bring back memories to many folk.

A stern upright man was Jack, who, as far as I can recall, was never seen in public without his shop uniform.

I can still see him there standing behind the high counter, the brown coat buttoned up, as he eyed young customers, always with a suspicion that someone was going to ‘lift’ a sweet.

Some chance, where Jack had his sweets you’d want an arm the length of two of Dan Donnelly’s to reach them.

Jack also sold slab but the value was nothing compared to Sarah Flood’s.

Jack must have spent hours cutting up the slab into two squares at a time. And that’s exactly what you got, two squares, neatly wrapped, nothing more, nothing less.

Down the town, as we used to say, you had O’Rourke’s sweet shop, just beside Mulvey’s.

Now this was a more upmarket shop.

Yes you could get sweets and the best of fruit here (the only shop I can ever remember that sold dates) but not the ‘quarter’ of sweets.

O’Rourkes was one of those shops that also sold the big bars of chocolate. You know the ones I mean. There was the long thin Cadbury bar and then there was the standard bar, but they also sold the next size, the one’s you could only afford when you were ‘carrying’ after making your First Communion or Confirmation.

Fox’s Shop on the Fairgreen, where Larry Swan now has his thriving vegetable shop and restaurant, was also a  bit special in those days.

The big steps you had to climb would deter young kids and older folk from attempting to enter but as it was the last pit stop on the way to visit someone in the Hospital (no hospital shop in those days) it always had a fair clientele.

Hands up those of you who can remember the syphon bottle of red lemonade?

Fox’s did a thriving trade on the syphons as they were always top of the list when visiting a patient; along with, of course, black grapes and oranges nearly as big as melons that were an absolute curse to peel.

Now the black grapes wouldn’t be found in every shop.

O’Rourkes would be the shop for the black grapes (the green variety could be got in any shop that sold fruit but the black variety was that little bit more expensive and came in a box to the shop with each bunch separately wrapped in white (or sometimes purple) tissue paper. Posh or what.

If you were in hospital with any sort of an ailment  you were practically guaranteed a syphon of red and a bunch of black grapes.

Heading further down the town you had Hanrahans (ice cream sodas on a Saturday night was the big treat here) while down at the flicks (cinema to modern day kids) you had Rooney’s and Harney’s, not forgetting Mrs Conway Behan’s (would I dare).

Ah those were the days.

The days when you could get a quarter lb of sweets, precisely weighted, and in a small brown bag for as little as a few pennies.

Days that are long gone.

Days when you could buy a fag in Sarah Flood’s and puff it in her sitting room; days when a bunch of black grapes, not forgetting the syphon of lemonade, would do wonders for your health.

Makes you wonder when a shop specialising in a huge variety of sweets decides to move on.