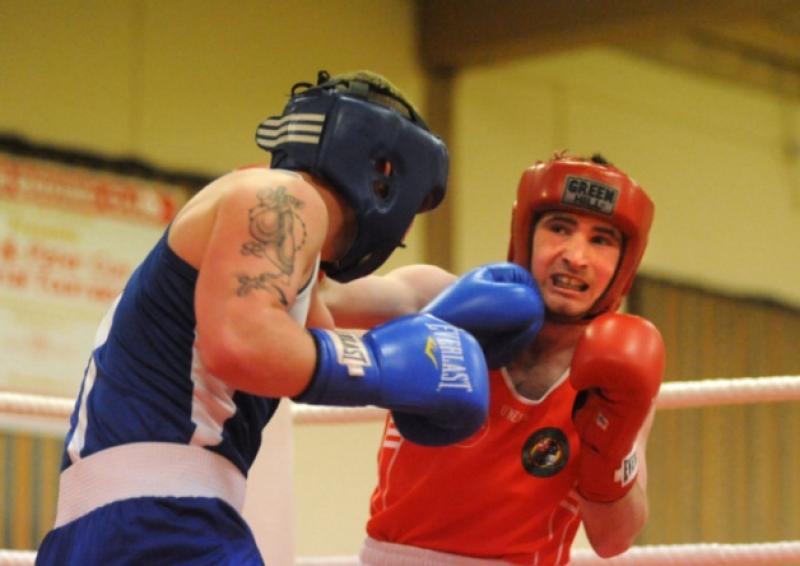 This Friday, the National Elite Senior Boxing Finals get under way in the National Stadium – and for the Ryston pair of Hughie Myers and Dervla Duffy, it’s all about defending the titles they won twelve months ago.

This Friday, the National Elite Senior Boxing Finals get under way in the National Stadium – and for the Ryston pair of Hughie Myers and Dervla Duffy, it’s all about defending the titles they won twelve months ago.

Kildare native Chris Phelan, on the other hand, will be hoping to finally get his hands on a national title after three back to back defeats in finals.

And with Olympic bronze medalist Michael Conlon looking set to move up a weight, 2014 just might be Phelan’s year.

Last year was a disappointing one for the St Michael’s club in Athy, and their coach Dom O’Rourke is hoping for better luck this time round.

At present, they have eight boxers entered, however they are sweating on the fitness of Eric Donovan, who has a shoulder injury, while Roy Sheehan has yet to decide if he’ll take part.

However, the Grangecon club have confirmed that defending 64kg champion Ross Hickey will not take part as he has yet to return to full fitness after a shoulder injury.

Hickey’s final bout against Ray Moylette last year was arguably the contest of the finals, and he will be sorely missed when the championships start.

In 2013, Mullingar man Hughie Myers became the first Ryston man to win a national senior title since Tommy Tobin claimed gold way back in 1986 – and he’s eager to retain his crown when the competition gets underway this weekend.

Since winning the title, Myers has been training with the High Perfomance team, and although injury ruled him out of the Europeans, he has had a very productive year.

“It has been a busy year. I’ve been up in Dublin with the High Performance team all year, I was in France in August, Finland in April and in Sheffield for a training camp. I’m only finished with Ireland two weeks ago,” Myers told the Leinster Leader this week.

“ I won gold in Helsinki and won my two fights in France and was beaten in the semis in early April. So I’ve been busy, but it has been a good year.

“The only thing I wasn’t happy with was missing out on the Europeans, but that was through injury. I was out for a month with a head injury,” he added.

He beat TJ Waite from Cairn Lodge in the final, however, this time round it looks like Barnes will be troubling the Mullingar man in the division.

It was rumoured that Barnes is struggling to make the weight and was likely to move up to flyweight, a move that would make Myers a huge favourite to retain his title.

However, the Belfast man confirmed to the Leinster Leader this week that he will indeed box at light fly.

“He’s (Paddy Barnes) is trying to get down but whether he makes it or not doesn’t matter to me. You have to beat the best to be the best, don’t you?” admitted the champion.

“Last year’s fights were good, but Paddy wasn’t there so I might get a crack at him this year. I’m not pushed really though. If he’s there, he’s there and if not I’ll just get on with it. If you don’t meet him in Ireland, you’ll meet someone like him when you’re boxing for Ireland, you’ll meet as good or better.”

One man who won’t have to compete with an Olympic medallist is Chris Phelan. Michael Conlon is expected to move up, so Phelan might finally get his hands on a coveted title.

“Michael Conlan is gone but that doesn’t phase me either. I’m just concentrating on myself. I still have to beat whoever is in front of me in the weight,” insisted Phelan.

Work commitments with the army meant Phelan didn’t get to prepare as well as he would have liked last year, but despite a hand injury, the Ryston man feels more prepared than ever for Friday’s finals.

“I’m not long back after a hand injury so I’m still trying to get things going. I haven’t been doing much boxing because I’m in the army, but for the last couple of months I’ve been back at it.

“I was in Washington back in October in the Golden Gloves, so I had been training for that and then took a break.

“I went back at it then, but the hand injury kind messed things up over the last month or so, but I’ll be grand. I’m sick of getting beat now to be honest. I’m due one,” insisted Phelan.

“In fairness to the army, they have helped me out a lot. They give me as much time as they can for training. I’m down in Kilkenny so I’m travelling back and forward.

“Hopefully I’ll eventually get back to The Curragh. I’m getting two sessions a day in Kilkenny at the moment, so it’s busy,” he added.

Another busy lady at present in Phelan’s club mate Dervla Duffy, who will look to defend her bantamweight title at the National Stadium.

Last year, Duffy got the better of Michelle Lynch in the 54kg final and she was overjoyed to have finally gotten over the line in what was an emotional time for the Monaghan native.

“I’ve been in four senior finals in four years in a row, so hopefully I’ll get a fifth,” she said.

“My granny was terminally ill last year and that was forefront in my mind at the time. When I was getting into the ring, it was all that was in my head. It was emotional and I think it helped me a lot. I was doing it for her especially after losing two before that.

“I trained so hard last year and it was the only thing I wanted. This year has been the busiest I’ve ever been before the senior finals.

“I’ve never ever had fights coming up to the seniors. I’ve had one every week for the last three weeks.

“I was in Holland recently and I boxed their number one 51kg girl in The Hague and I felt I won very comfortably, but the judges thought otherwise.

“There were no Irish judges – it wasn’t an international competition, it was a show but it was experience we were going for more than anything. We didn’t really mind the decision, as long as we got a good fight and I did.

“The week before that, I had two good fights – one in Limerick against the intermediate 60kg champ and one in Wexford against the 57kg intermediate champion Lindsey Doyle. So preparation like that is great for your fitness,” remarked Duffy.

So it’s all systems go for the finals.

All three are confident of delivering the goods, and so too is coach Paddy Hughes.

“Last year, Chris didn’t get all the training he could have because of him being in the army,” the coach explained.

“He was in the recruit training and he tried as best he could with Conlan. You have to remember that Conlan had been away training out foreign, and you could see that difference on the night.

“The monkey is off Chris’ back with Conlan moving up a weight, so he should get his title and then hopefully they’ll all be going away to the world and European championships,” added Hughes.

Worlds and Europeans aside, all focus for now is on Friday’s opening bouts.

Ryston and St Michael’s will fly the flag high for Kildare and fly it well.

Three national champions came out of Kildare clubs last year – and maybe even more will return this time around.