Fun all round at Rathcoffey 10k 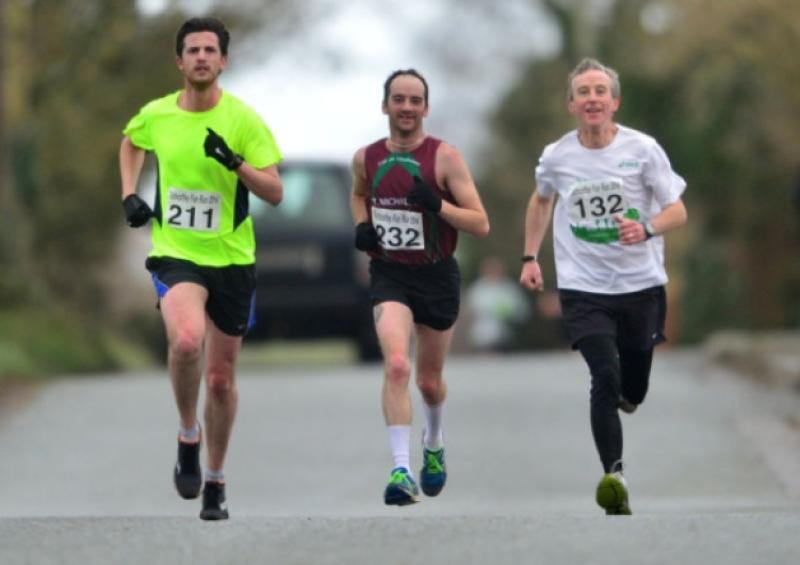 Sunshine on a rainy day was the order of the day in Rathcoffey on Saturday morning 8th February last when 250 runners set off on the third annual 10k fun run.

Sunshine on a rainy day was the order of the day in Rathcoffey on Saturday morning 8th February last when 250 runners set off on the third annual 10k fun run.

The grim forecasts from Met Eireann during the week looked like the run would be an endurance rather than fun event.

After some early showers however, the clouds parted to see the runners set off from the Clubhouse in glorious sunshine, although the wintery conditions of the night before and early morning undoubtedly affected the final attendance.

The Fun Run is organised by a group of the club’s senior footballers, who once again made sure that no detail was left to chance, with visiting runners from Naas, Kilcock, Newbridge and Dublin remarking on how enjoyable the morning was.

The course is relatively flat, taking the runners from Rathcoffey to Ladychapel before turning for Smithstown and Johninstown and heading back to the clubhouse against the backdrop of Rathcoffey Castle.

One of the more remarkable participants was Ciaran McCaffrey who traveled from Belfast to take part. He is attempting to run one hundred 10k’s in a year, with the Rathcoffey event making it number 20. Brendan left Rathcoffey for Enniscorthy where he was competing in another 10k the following day.

The flat course contributed to the fast time of 32.58 run by this year’s winner Patrick Roche. He had a margin of just over one minute back to the runner up Kevin Baker, with regular Rathcoffey fun runner, Peter Mooney, a further 20 seconds away in third place.

Rathcoffey based teacher, Catherine Kelly, won the women’s race in a time of 41.24, going one better than in 2013. Catherine had a comfortable two minutes to spare over the runner up Gena Byron with Helena Walsh close up in third spot.

The first three home in each category were presented with engraved glass by the fun run chairman, Joe Heslin.

Visitors to Rathcoffey GAA often remark on the great community spirit around the club. This was evident on the morning with an army of club members volunteering to register the runners, provide refreshments before and after at the club house as well as marshal the car park and the major junctions on the road. The motorcycle outriders, led by Rory Moore and Fergie Dalton, did a great job ensuring the safety of the runners as they made their way around the course, while water marshals helped to keep the runners well hydrated.

The 2014 fun run once again supported Console, the National Suicide Charity. This event gets better every year and is now an annual fixture on the calendar of runners and walkers of all ability.

The club is already looking forward to the 2015 event already.