Phelan finally gets his hands on title 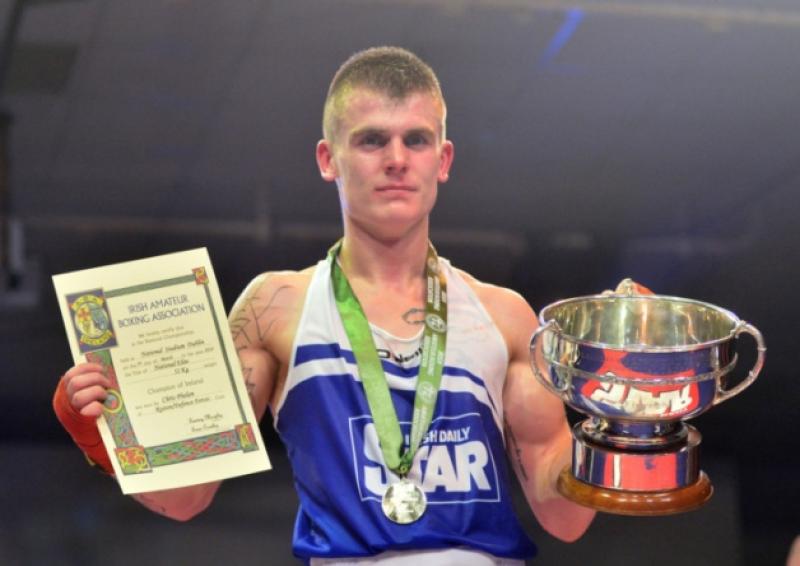 Both Chris Phelan and David Oliver Joyce have endured some tough nights the National Stadium so they had more reason than most to leave the Dublin venue on Friday night with massive smiles after becoming National Elite Champions.

Both Chris Phelan and David Oliver Joyce have endured some tough nights the National Stadium so they had more reason than most to leave the Dublin venue on Friday night with massive smiles after becoming National Elite Champions.

Combined, the pair had lost the last seven finals but their perseverance was rewarded on Friday.

It was particularly sweet for Ryston’s Phelan. The 21 year old had lost the three previous 52kg finals to Mick Conlon but with the Olympian boxing at a heavier weight this year, a chance was presented to Phelan and he took it with both hands.

“At last, I can’t describe it now to be honest, I’m absolutely delighted, it’s a long time coming,” he said, before reflecting back on the days of three successive final defeats.

“I never want to go back there, getting beaten once, twice, fair enough, three times? That was heartbreaking. This time I really went for it but I wasn’t even going to enter it, I got a hand injury about a month ago, I’m only back in training about three weeks now. I got great sparring off Hughie (Myers), Dervla (Duffy) and Jamie (Higgins), they gave me the spars that I needed. I got a bye to the semis then a walkover because Ruairi (Dalton) was injured. He already had two fights behind him in the seniors so I was coming in a bit rusty, it took me a while to get going but once I got going I started landing a few shots. I could feel myself getting stronger, I wasn’t getting tired, I was getting stronger as the fight went on,” he said.

Phelan was the unanimous winner over Adam Courtney but it took some words from coach Paddy Hughes after the first round for him to find his best form.

There was a real confidence in the Ryston’s boxer’s showing and he said that he was knew he was capable of stopping his opponent in his tracks.

“I was landed a few big right hands and I could see in his eyes that he was hurting. When I was landing he was moving so I knew I was hurting him so I said that’s working, I’d keep doing that. Almost every time I threw that I was landing it and everytime it landed it was hurting him more. Coming into the last 30 seconds I was more confident. When the bell went...you can never be sure with the scoring what way it is going to go. This time I got it and I’m absolutely delighted,” he said.

With a senior title in the bag, Phelan now has big ambitions and Rio in 2016 for the Olympics is still very much at the forefront of his mind.

“The goal was always the Olympics. Get this title and then worry about the next stage. Get the internationals, hopefully the EU’s, the world military games, get all that and I’ll be twice as good next year. I can’t see anything stopping me then, I’m not being cocky but if I win the senior title next year there are the Olympic qualifiers and getting there would be an achievement in itself,” he said.

St Michael’s of Athy boxer David Oliver Joyce was in a slightly different position to Phelan ahead of the 60kg final against reigning champion Sean McComb.

27 year old Joyce burst onto the scene as a youngster and won four finals in a row between 2005 and 2008 but lost in four finals since his last title. After his hand was raised in victory over McComb he admitted that a fifth finals defeat might have been the end.

“If I lost I would maybe have thought about packing it in but now that I have won a senior title it’s something to defend next season.”

“I boxed in nine finals but I’ve a lost a few since my last title. You can’t say I’ve been going downhill, I’ve boxed good boxers, but I didn’t seem to perform. Now that I have been doing the WSB (World Series of Boxing) for the last three to four seasons with no headguard, I’ve been adapting to that style and it suits me a lot more. I was over the moon when they decided their would be no headguards in the seniors.”

“Losing all those finals in a row, it’s hard to keep up there, I’m 27 but now I have a senior title it’s something to drive on for again next season. I’m the guy to beat,” said Joyce.

In the 49kg, there was no big shock when Hughie Myers of Ryston took on Paddy Barnes with the Ulsterman claiming his seventh senior title.

Afterwards, Myers had no shame in losing to a man that he considers the best in the world.

“He is ranked number two or three in the world but I think he is number one. It’s good to be able to go in there and match Paddy and go with him, he just had a bit more in the end, on another day I could have got him,” he said,

Myers will see plenty of Barnes in the coming year as they spar together in preparations for internationals and he hopes to pick up a few tips on how to get past the champion.

“I’ll be up with Irish team all year and will get internationals with them.

“I presume Paddy will be going to be the Commonwealth’s so I will probably go to the EU’s if it works that way but we won’t know until July. There will be multi nations so I’ll be kept busy. I’ll be sparring Paddy all year up in Dublin anyway, I’ll get the hang of him,” said the 2013 light flyweight champion.