Hurricane Fly blows them away 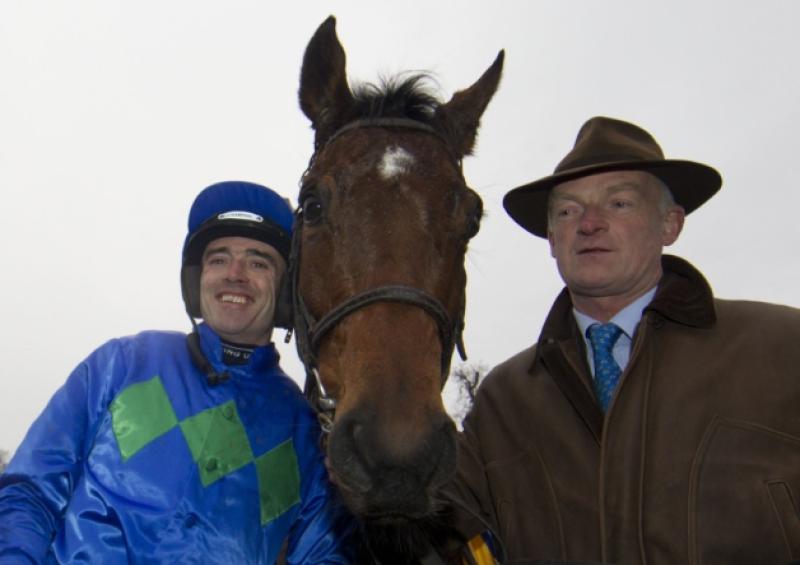 Hurricane Fly showed that he isn’t going to give up his Champion Hurdle crown too easily by producing an excellent performance to see off the two most promising young hurdlers in Ireland in the featured Grade 1 Ryanair Hurdle at Leopardstown on Sunday.

Hurricane Fly showed that he isn’t going to give up his Champion Hurdle crown too easily by producing an excellent performance to see off the two most promising young hurdlers in Ireland in the featured Grade 1 Ryanair Hurdle at Leopardstown on Sunday.

Willie Mullins’ stable star was given a confident ride by Ruby Walsh and showed his trademark turn of foot to beat Jezki and Our Conor by a cosy 2½ lengths. The other Grade 1 on the card was the Topaz Novice Chase and it saw the John Kiely-trained Carlingford Lough produce a tough winning performance to score by 1½ lengths under Tony McCoy.

Mikey Fogarty has been in excellent form since turning professional earlier this season and he took centre stage on the final day of Limerick’s Christmas meeting on Sunday by securing a double.

He opened his account in the Online Booking Mares Maiden Hurdle, riding the Prunella Dobbs-trained Romantic Fashion to an authoritative 2¾ lengths victory. The Fogarty brace was completed in the Family Fun Beginners Chase, with him teaming up with the in-form Paul Nolan to record a hard-fought length victory on Jupitor.

BOBS WORTH BACK TO BEST

The reigning Cheltenham Gold Cup hero Bobs Worth, trained by Nicky Hendeerson, stole the show at Leopardstown on Saturday with a typically-tough winning performance.

The eight-year-old looked in trouble entering the straight, but Barry Geraghty conjured a strong finish out of him and he eventually saw off First Lieutenant by 1½ lengths.

Elsewhere on the card, Willie Mullins and Ruby Walsh combined to complete a treble. The pick of their wins was that of Zaidpour in the Grade 1 woodiesdiy.com Christmas Hurdle, whilst they also won the Madigans Maiden Hurdle with Sure Reef and the Ballymaloe Country Relish Beginners Chase with Djakadam.

The Willie Mullins-trained Faugheen was the star attraction at Limerick on Saturday and he didn’t disappoint in the featured Grade 3 Liberty Insurance Novice Hurdle.

Ridden by Emmet Mullins, the five-year-old made all the running and didn’t have to come off the bridle to maintain his unbeaten record by a margin of five lengths. The pick of the rest of the action was perhaps the Emmett Leahy Millstream Memorial Veterans Handicap Chase and it saw the Tom Foley-trained Playing take the spoils by four lengths under Kevin Sexton.

The Tony Martin-trained Benefficient has been underrated throughout his career, but he showed once again just how talented he is by winning the Grade 1 Paddy Power Dial-A-Bet Chase at Leopardstown on Friday. Ridden by Bryan Cooper, the seven-year-old hit the front at the final flight and gamely ground out a ¾-length victory. The other Grade 1 on the card was the Paddy Power Future Champions Novice Hurdle and it saw the Philip Fenton-trained The Tullow Tank stamp himself as the top novice hurdle prospect around. The five-year-old responded strongly to Danny Mullins’ urgings to lead before the final flight and drew right away to score by eight lengths.

The Tim Duggan Memorial Handicap Chase was the main event on Friday’s card at Limerick and while it looked fiercely competitive on paper, it was turned into a procession by the Charlie Swan-trained Make A Track.

The seven-year-old was never far from the leaders under Brian Cawley and having hit the front at the fifth-last fence, he eventually came home 15 lengths to the good. There was drama in the Lyons Of Limerick Jaguar Land Rover Hurdle, with the Eoin Doyle-trained Mazuri Cowboy profiting from carnage at the second-last flight to record a shock 40/1 victory under Martin Ferris.

Paul Nolan had a day to remember on St Stephen’s Day at Leopardstown, completing a memorable double that featured the exciting victory of Defy Logic in the Grade 1 Racing Post Novice Chase.

Given an attacking ride by Mark Walsh, the six-year-old took advantage of a bad mistake by his main rival Champagne Fever at the second-last fence to grind out a 3½ lengths victory. That completed Nolan’s brace, as he had already saddled King Vuvuzela to win the Racing Post All You Need For Irish Racing Handicap Chase under Bryan Cooper. Cooper himself was in double form, as he also rode the Dessie Hughes-trained Guitar Pete to win the Grade 2 Knight Frank Juvenile Hurdle.

MULLINS IN DOUBLE FORM AT LIMERICK

Willie Mullins was the star performer at Limerick on St Stephen’s Day with the Champion Trainer securing a double. Without question the pick of his wins came in the featured Grade 2 Greenmount Park Novice Chase, for all that it was his second string runner The Paparrazi Kid and Emmet Mullins that beat off the challenge of his better fancied stable mate Felix Yonger by 1½ lengths. That completed the Mullins double, as he had already saddled Smashing to run out the very easy seven lengths winner of the O’Kelly Bros. Demolition & Environmental Contracts Hurdle under Paul Townend.

CRAWFORD DOUBLES UP AT DOWN ROYAL

Local trainer Stuart Crawford and his brother Stephen took centre stage at Down Royal on St Stephen’s Day, combining to complete a notable double on the card with two promising sorts. Their accounts were opened in the I.N.H. Stallion Owners European Breeders Fund Maiden Hurdle with the exciting Man With Van hitting the front after the third-last flight and comfortably beating off all challengers.

Their braces were completed in the Barclay Communications Flat Race with Twentytwo’s Taken making a very promising winning debut by a margin of 10 lengths.

Nicky Henderson has confirmed Sprinter Sacre is suffering from an irregular heartbeat after his star two-miler underwent tests in Newmarket on Saturday morning.

The seven-year-old made his seasonal bow in Friday’s Desert Orchid Chase at Kempton and all appeared to be going well for National Hunt racing’s brightest star until not long after halfway jockey Barry Geraghty suddenly applied the brakes and trotted back anti-clockwise around half a circuit before dismounting in front of Henderson and concerned connections. Racecourse vets initially diagnosed an irregular heartbeat and that has now been confirmed by Celia Marr, a specialist in equine internal medicine and cardiology.