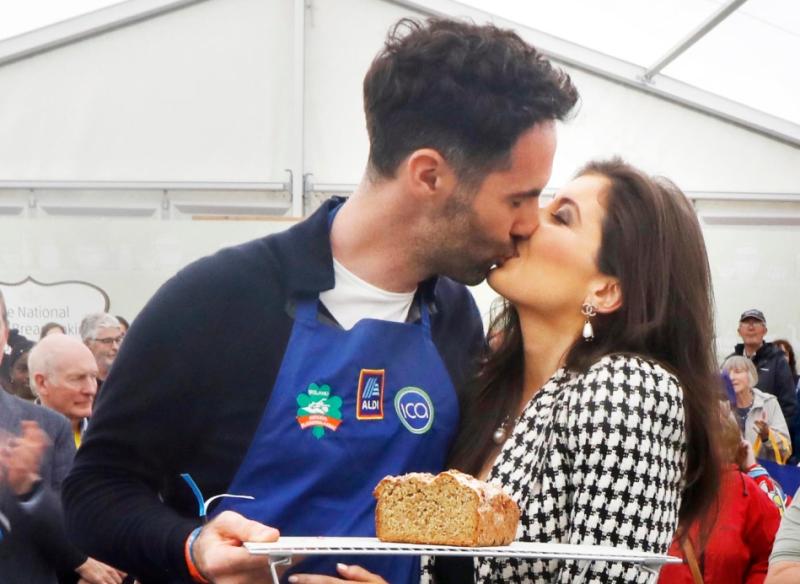 Daragh O’Brien with his wife Carol after being crowned the winner of the National Brown Bread Baking Competition 2022, Photo: Leon Farrell/Photocall Ireland

Co.Kildare's Daragh O’Brien is the winner of this year’s National Brown Bread Baking Competition sponsored by ALDI, in association with the National Ploughing Association (NPA) and the Irish Countrywomen’s Association (ICA). He becomes the first ever male to win the competition and will have his winning loaf of brown bread available in ALDI stores nationwide later this year.

Relaunched eight years ago by the NPA, the competition has become an integral part of the National Ploughing Championships. With Ireland’s amateur bakers having refined their baking techniques during lockdown, this year’s competition attracted hundreds of entries with finalists progressing through a series of regional heats.

The final was held on September 22 in the ALDI Marquee at the National Ploughing Championships. Eight bakers from across Ireland competed against one another over a two day bake off. Today’s final was extra special and meaningful as it marked the first time in three years that it took place live at the National Ploughing Championships. In the end, it was Daragh who emerged victorious and was crowned the winner, having impressed the judges with his rustic loafs deliciously crumbly texture and rich flavour.

Daragh will receive a prize of €15,000 with his brown bread being stocked in all 152 ALDI stores nationwide.

Speaking about his win O'Brien said, “I am absolutely speechless! As an avid home baker, it is such an honour to be named the winner of the National Bread Baking Competition, particularly given the competition this year. I cannot wait to see my bread stocked in my own local ALDI as well as other stores nationwide.”

Commenting on the competition, John Curtin, Group Buying Director at ALDI said: “After a three-year pause on normal proceedings, it is with delight that we were able to bring the National Brown Bread Baking Competition back to the National Ploughing Championships. At ALDI, we are proud to sponsor this competition in conjunction with the NPA and ICA. Both the volume and the standard of entries received this year are a credit to Ireland’s bakers and confirmation if it were needed that this long-standing Irish baking tradition is alive and well. We wish to offer a hearty congratulations to our winner Daragh as well as our runners-up.”

NPA Managing Director, Anna May McHugh said, “Given the huge popularity and success of the National Brown Bread Baking competition we were delighted to have been able to return with the live competition here at the National Ploughing Championships and to congratulate a very worthy winner once again. We want to wish Daragh all the best, and we all are very much looking forward to seeing his award-winning loaf of bread on shelves throughout the year – we have no doubt that the people of Ireland will love it.”