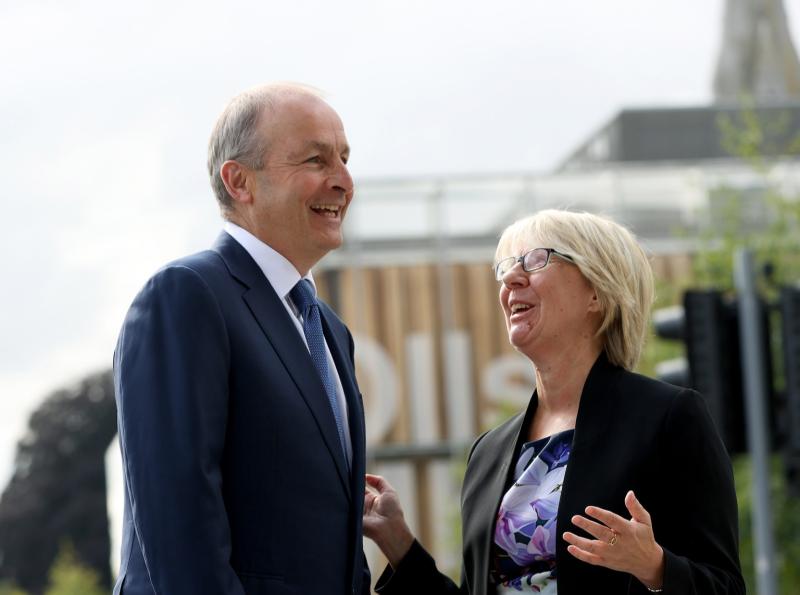 Taoiseach Micheál Martin visited Maynooth University on September for a celebration to mark its 25th anniversary as an independent institution.
The Taoiseach also officially opened the new Technology, Society and Innovation (TSI) Building, Maynooth’s landmark infrastructural development designed to enhance the University’s excellence in research, education and skills development for future generations.
Spanning 10,500 square meters, the University’s latest high tech hub will house living labs and break out rooms for interactive research; three large theatres of 500, 300 and 250-seat capacity, and research spaces for students, academics and collaboration with industry partners.
It also includes a spacious outdoor plaza alongside for gatherings, cultural activities, events and performances.
This latest capital development on the University’s North Campus will help to meet the capacity needs of a rapidly growing student population, rising to 15,000 this year, from 4,000 in 1997 when Maynooth was established as an independent institution.
The €48 million TSI Building is a landmark edifice and part of an overall €57 million capital development project that includes modernisation and expansion of the Arts and Sciences buildings on the University’s North Campus.
The capital project was made possible by €25 million from the Government's Higher Education Strategic Infrastructure Fund announced in 2019.
Congratulating Maynooth University on its 25th anniversary and on its latest TSI building, the Taoiseach stated: “I’m delighted to be here to celebrate Maynooth’s 25th anniversary and to open the new Technology, Society and Innovation Building.
“Maynooth has always played a pivotal role in Ireland’s education system, and its influence has grown nationally and globally, making a significant and distinctive impact on Irish society.
“This is a fantastic resource and innovation space for future generations to study, explore and contribute to Ireland’s workforce and innovation needs, as we move towards a digitally advanced and sustainability-focused society.
“Maynooth University offers important strengths in those areas and I look forward to the contributions of its graduates and its academics over the next 25 years and beyond.”
Maynooth University President, Professor Eeva Leinonen, said a key strength of Maynooth University is exploring the interaction between technology and humans to the benefit of society, everything from drone technology to data privacy, and climate change.
She added: “So, it is incredibly fitting today that we open the Technology, Society and Innovation Building, showcasing those strengths and signifying our embrace of the future.”