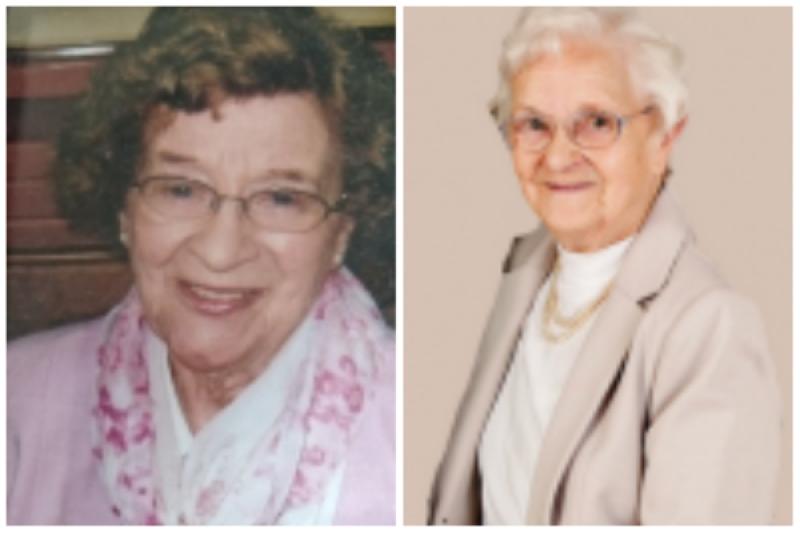 RIP to the late Isobel Walsh and Anne Kent

May Stella Rest in Peace

Reposing at McWeys Funeral Home, Abbeyview, Kildare Town (Eircode: R51 TE20) on Thursday from 6pm with Rosary at 7pm. Removal by Glennons Funeral Directors on Friday morning to arrive at The Carmelite Church, Kildare Town for Requiem Mass at 11 o'clock. Funeral Mass on Saturday in St. Mary's Church, Ballybrack, Donegal at 11am. Burial afterwards in the adjoining cemetery.

Stella's Funeral Mass can be viewed on the following link:

Reposing at Cunningham’s Funeral Home, Celbridge on Friday evening (9th September) from 6pm to 8pm. Removal to the Church of St. Thérèse of the Child Jesus, Donore Avenue on Saturday morning arriving for Requiem Mass at 11am followed by burial in Esker Cemetery, Lucan. Family flowers only please. Donations, if desired, to St. Brigid’s Hospice, Kildare. Messages of sympathy and condolences for the family may be left by selecting “Condolences” below or alternatively at www.cunninghamsfunerals.com.

“May he rest in peace”

Isobel’s Funeral Mass may be viewed online by following the link below;

Messages of sympathy and condolences for the family may be left by selecting “Condolences” below or alternatively at www.cunninghamsfunerals.com. Family flowers only please. Donations, if desired, to Cancer Research. House private please.

Craddock Hosue Nursing Home and late of Kingsfurze Avenue, Naas. In the tender care of the staff of Naas Hospital. Predeceased by her parents Gerald and Marguerite, sister Geraldine (Kehoe), brothers Pierce and Eddie and sister-in-law Colette.

"May Anne Rest In Peace"

Reposing at the George Mullins Funeral Home, Kilcullen Road, Naas on Wednesday from 5pm to 7pm with Prayers at 6.30pm. Funeral on Thursday with Requiem Mass at 10am in the Church of Our Lady and St. David, Naas and afterwards to St. Corban's Cemetery, Naas.

The Mass will be streamed on