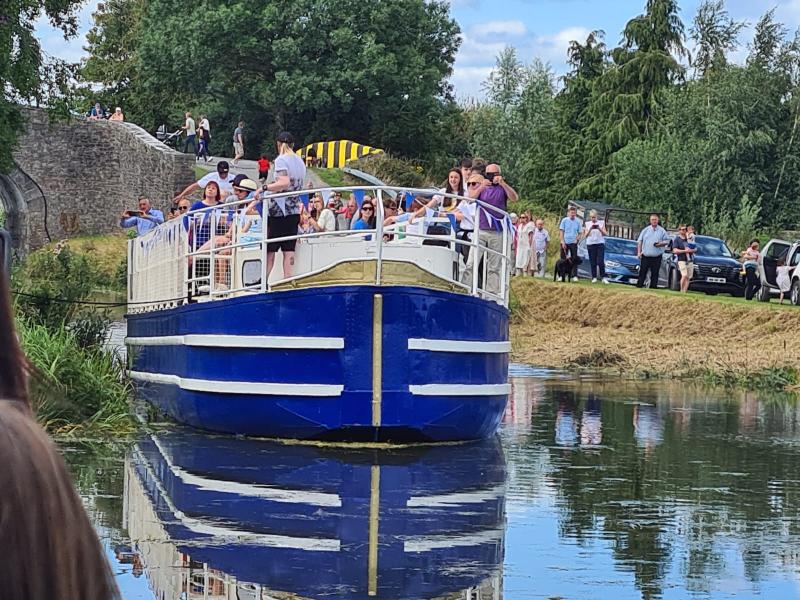 The barge arrives in Robertstown

The 52M had previously been donated to the community but fell into dereliction.

But thanks to the efforts of the Robertstown Community Amenities Association it has been refloated.

“It was a travesty that this happened in the first place because nearly everybody in the community has memories of the barges in use on the canal and it was also a symbol of efforts to establish some kind of tourist enterprise based on the canal system,” said Peter Dunne of the RCAA.

The boat hadn’t been used for two decades and it had to be refloated and lifted from the Grand Canal having been sunk for some five years.

The cost of refloating and renovating the boat came to some €150,000 with most of this coming from Bord na Mona, which operates the Drehid landfill as well as a grant from the County Kildare Leader Partnership with some money raised locally. Most of the money (€90,000) came from the Drehid grant scheme which is managed by Kildare County Council and Bord na Móna, which operates a waste management facility between Derrinturn and Allenwood. The scheme provides financial assistance to community organisations  in the local area  to fund environmental, recreational and community projects which will mitigate the impact of the facility on the local community. Granted are not available for individuals or organisations that are engaged in business for profit activities

Athy Steel Products did most of the reconstruction work, which included rebuilding the floor and the bow.

The engine had to be overhauled and it’s canalworthy again, so to speak, after the three long project. In all, the reconstruction job took three years, starting in 2019 and some of this was due to delays created by the Covid-19 pandemic and the fallout from Brexit.

The finished product is a far cry from the wreck that was lifted by crane from the canal and placed on a lorry to be transported to Athy.

The community association hopes that the next step will be to open a cafe on the barge and this in turn will lead to efforts to breathe new life into the possibility of  exploiting the  tourism potential of the area.

It’s hoped that heritage-type trips will be provided to interested groups free of charge and efforts are being made to find a proprietor for the coffee shop, with income from this being used to pay the boat’s maintenance costs.

Over the course of its lifetime 52M has gone through numerous owners, been sunk twice and carried everything from porter, sand, gravel and the Roses of Tralee.

It spent the first half of its life in south Kildare in Graiguenamagh, Shannon Harbour and Killaloe.

It sank in the Shannon near Parteen in 1942.

In 1959 it was bought by Roadstone where it was used on the Suir to carry sand and gravel.

It sank once again in Mooncoin in Waterford in 1969 and was purchased for €350 by Robertstown Muintir na Tire.

In the early 70's it was relaunched and re-named the Eustace in recognition of Colonel Charles Eustace, a former Chairman of the court of directors of the Grand Canal.

And for several decades after that it was used for days out, weddings, the Rose of Tralee and a film starring Gabriel Byrne.