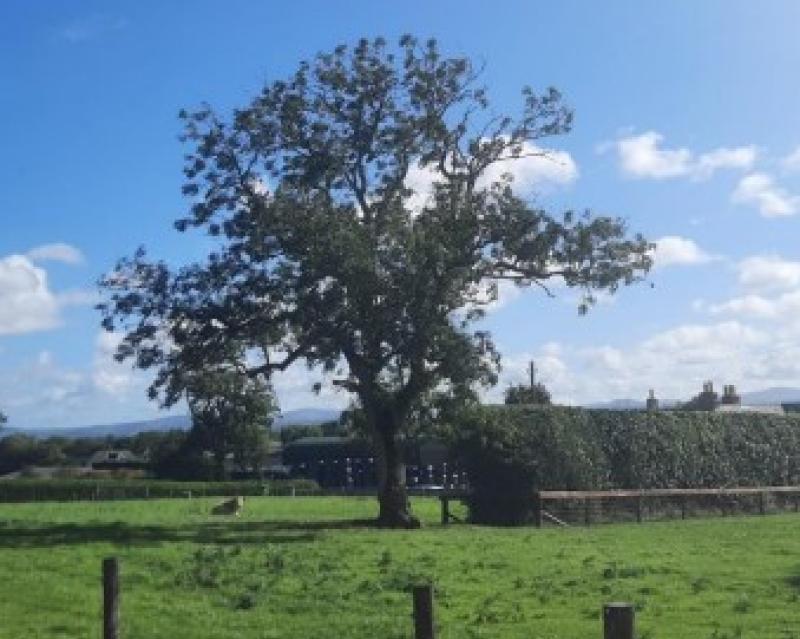 One of the trees in Caragh which is now protected

Councillors in the Kildare-Newbridge Municipal District (MD) have voted to protect 20 beech trees in Caragh village.
The public representatives agreed to adopt little-used Tree Preservation Order under Section 205 of the Planning and Development Act, 2000.
The mature beech trees are located on land to the east of the R409 and are opposite the Church of Our Lady and St Joseph Catholic Church.
The meeting heard the landowners concerned were notified in advance of the proposed Tree Preservation Order.
Cllr Noel Heavey said that he was familiar with Caragh and that the trees defined the village.
He said he had no hesitation in preserving the trees in the light of the destruction of the rainforests of South America and the overall challenges facing the world from climate change.
He added that trees give County Kildare its character.
A report from the Planning Department said the trees offer an attractive view and can be seen from various locations along main street, from the church, the graveyard and also glimpsed from Old Chapel Wood residential estate to the south east.
Officials said: “Views from the church and graveyard are considered to be valuable in terms of the area’s character.”
Beech trees are not considered native to Ireland, although they are noted for their beauty and benefits for wildlife.
Officials added: “Their use for hedging has been widespread in Ireland since the 18th century.
“Beech trees can live for 350 years, with 250 years considered more typical.
“It takes approximately 30 years for a beech tree to be fully mature.
“Based on this information, the trees subject of the TPO request would appear to be fully mature examples of beech and are likely to be ‘notable’ examples, that is between 75 and 150 years old.”