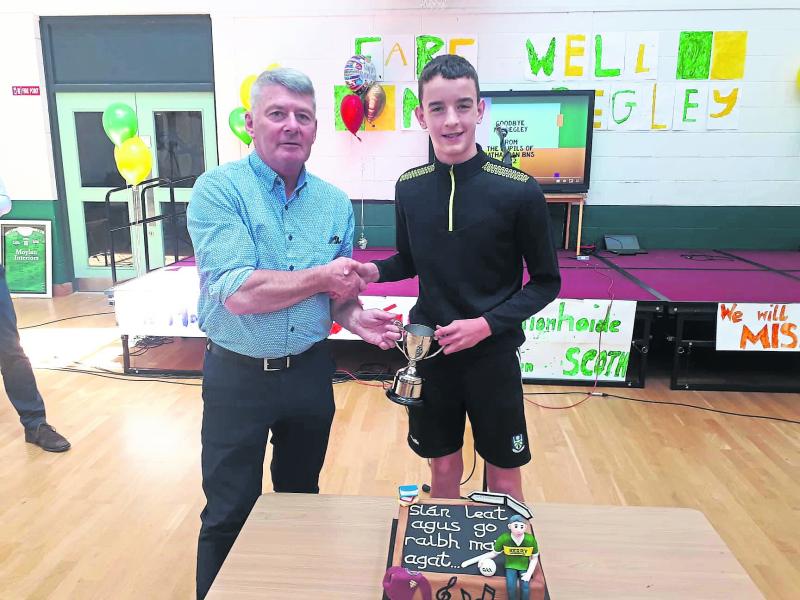 When the final whistle went in the Cumann na mBunscoil Division 1 final on May 10, there was one man with a smile bigger than all the rest.

The adopted Kerryman asserted this is one of his best memories from 37 years of teaching, 33 of which took place at Rathangan, including the past 12 as principal.

The new school building, officially opened in 2017, was a hard fought project initiated by former principal, the late Joe Lynch and spearheaded by Mr Begley. Now a new four classroom extension and ASD unit has been approved and the top class astro turf pitches are due to be finished in weeks.

With such achievements accomplished, the man originally from Ballyferriter, decided it was time to retire.

There was an outpouring of best wishes and appreciation at a special celebration held at the school last Thursday, June 23.

“It’s been an amazing journey,” he said.

Mr Begley explained how principal Mr Lynch always put the pupils first, and that ethos was carried on through his time.

“It’s a credit to our staff that we have an open, caring, happy learning environment,” explained Mr Begley.

He praised Maureen Hamilton who was chairperson of the board of management for 22 years and welcomed Yvonne McConnon as the new chairperson.

“Everybody worked together. It wasn’t every board of management who was going to support a principal, who said they wanted to build a pitch that would cost a quarter of a million euro plus,” he stressed as he referred to the astro turf.

“You won’t get any waffle from me. We will talk about it and then get it done. We won’t talk about it again. It took us a long time, but the support for the pitch was outstanding. We raised €36,000 from the summer ball. The parents were always very supportive of the school.

“I am always fair to everybody, fair to the children, fair to the parents, fair to the teachers and that’s what you get from me. We have an open door policy. If anybody has a problem, they can come in and talk about it.” 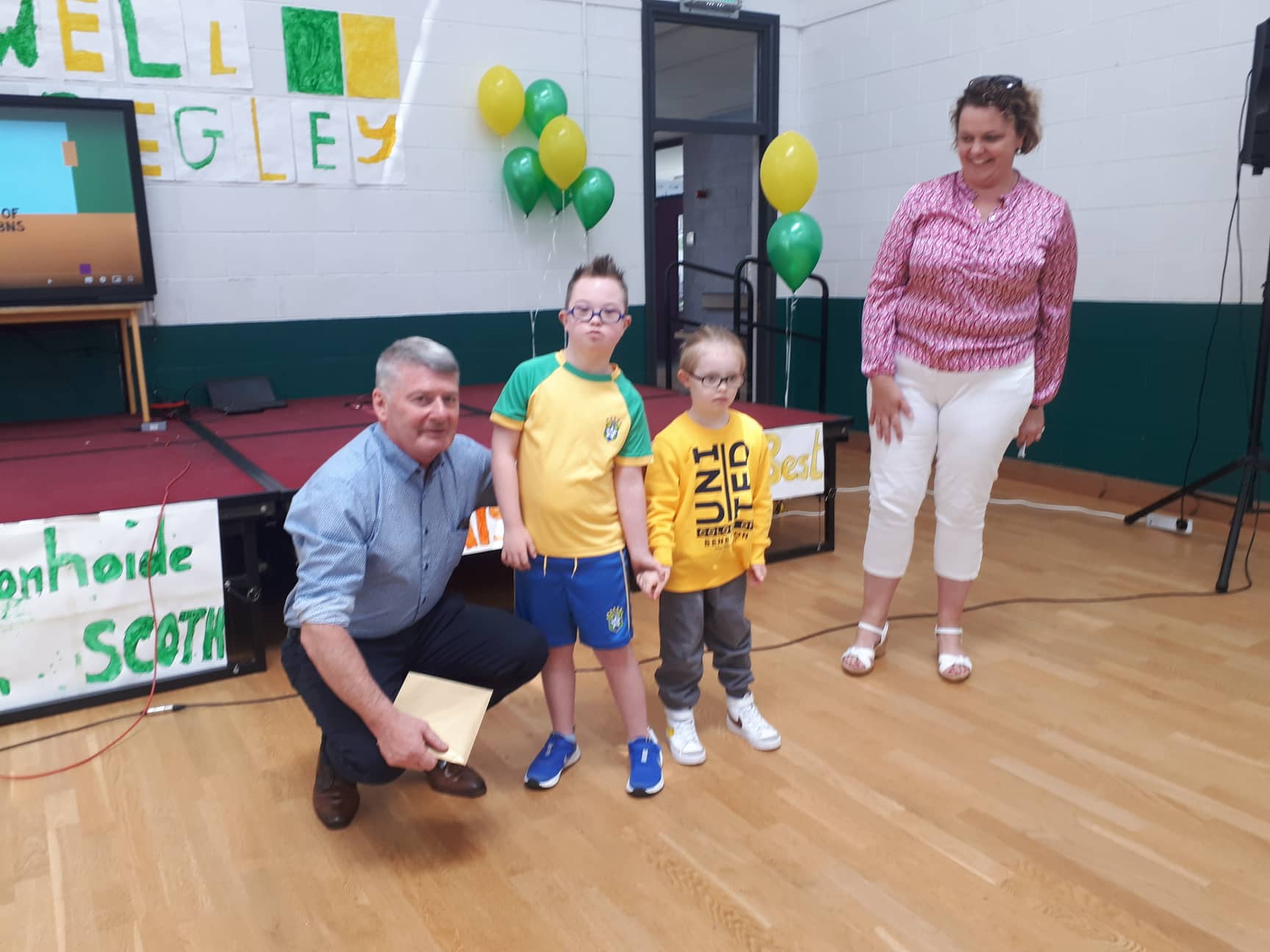 A man of action

Having played with Rathangan GAA club and coached at u13, 14, minors and U/21 level, the Newbridge resident’s love of Gaelic football and sport is immense.

Apart from the Division 1 title win, he cited the school’s 1916 commemorations as remarkable, describing the pupils’s performance as amazing.

He said the school’s staff are amazing and he will miss them and the kids. He also singled out school secretary Marian Evans as his right hand person, and described his deputy principal, Peter Kelly as ‘unreal’.

He thanked his wife Maria for being so supportive and also praised Ailish O’Connell, Andy Kavanagh, William Carroll and Jack O’Connell for their help with hurling in over the years.

He said the students also play soccer and basketball while the music programme has been fantastic with 80 students playing a musical instrument.

“The art programme has also been a huge success. The artists in the school are unreal and we have introduced Irish dancing as well,” he said.

Alice Murphy of the Parents Association said the wider school community wanted to wish Mr Begley well and she outlined his contribution to the entire community.

James Brennan, underage chairman of Rathangan GAA said Mr Begley had been a great supporter of the local club, providing a great foundation with young players honing their skills at primary school level.

Speaking on behalf of the parish and Fr Gerard O’Byrne, Fr Bill Kemmy paid tribute to Mr Begley for his stewardship of the school and for building links with the parish.

Senator Fiona O’Loughlin, who could not be in attendance, sent a message of support. “Sean made an immense contribution to school life but also to the community,” she said.

She explained he was a driving force behind several major projects. 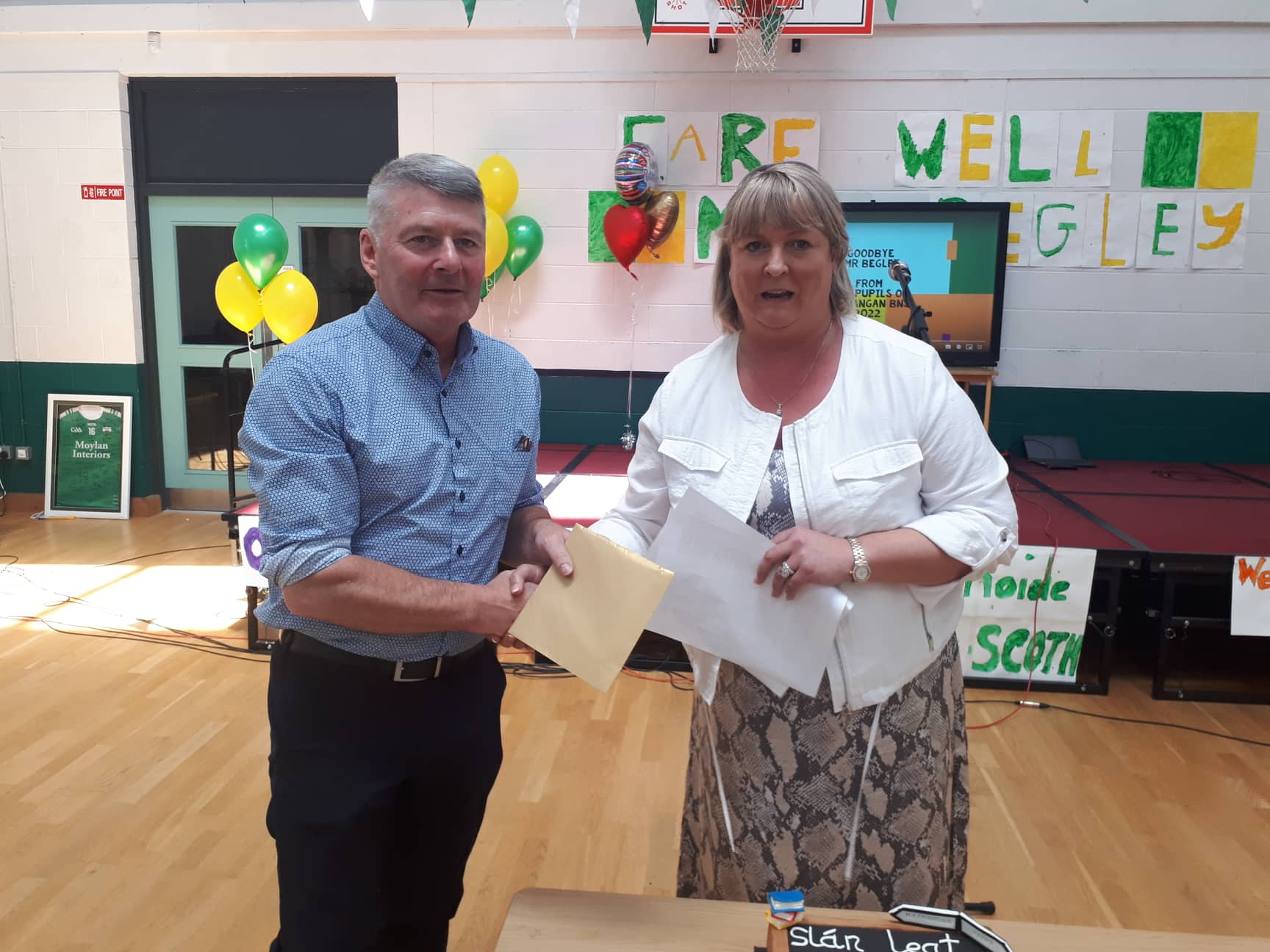 Deputy Principal, Peter Kelly said that Mr Begley is leaving a state-of-the-art school with over 30 staff and a new astro turf pitch, which will be the envy of schools across the county.

Mr Kelly said that when he first arrived seven years ago, he was struck by the warm atmosphere, as the kids were smiling, laughing and learning.

“It’s a culture that Sean has created over a number of years,” he said.

He thanked him on behalf of the staff and the whole community.

Yvonne McConnon, of Board of Management told how Sean, the son of Noreen and the late John, is brother to Tomás, Eibhín, Treasa, and Mairín. She thanked his wife Maria, and children Orlaith, Laura, Cliodhna and Sean for loaning him to the school for the last 34 years.

In regards to the pitch, she said he had a dream and he guided them with his inspiration.

She said he made the students believe in dreams and described him as remarkable, inspiring and a great role model.

“Thank you for every single second you spend here with us. Do not be a stranger,” she said. 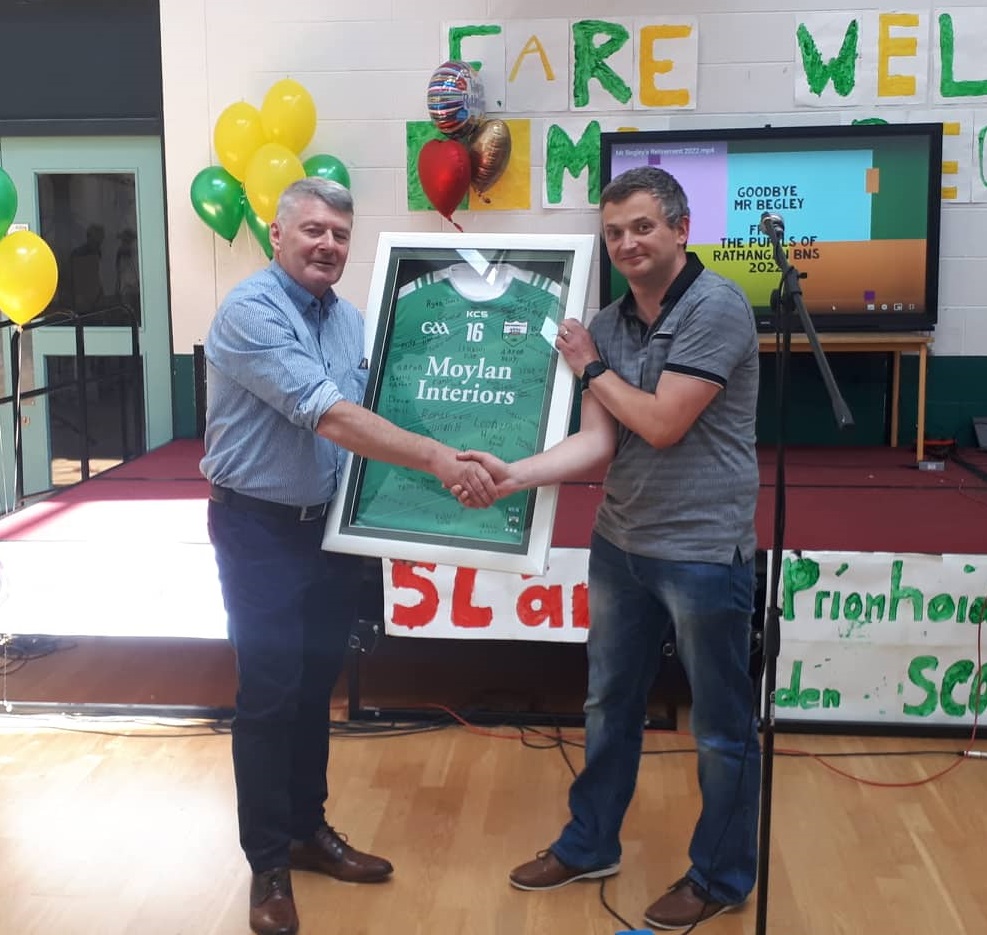 Rathangan GAA underage chairman, James Brennan presents a jersey signed by the players from the winning team of the Cumman na mBunscoil final.