The alleged incident was said to have taken place in Athy. Naas Courthouse. File photograph

A 26-year-old man was accused of assaulting a woman and driving off in her car.

The allegations were heard at Naas District Court on Thursday, June 23, and relate to Tebogo Sobala, with an address listed as 122 Corrán Árd in Athy.

A book of evidence was served on the defendant on the day by gardaí.

It was alleged that on November 20, 2021, Mr Sobala intruded on a property in Kildare that he had been staying at on an ‘on-and-off basis,’ according to Garda Sergeant Brian Jacob.

Gardaí claimed that when an alleged argument with the owner of the property ensued, the defendant assaulted her, leaving marks and bruises on her face. 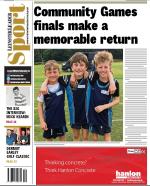 Mr Sobala was also accused of breaking a window at her property the following day, on November 21, which would constitute an alleged breach of Section 2 of the Criminal Damage Act, 1991.

Following this, it would be alleged that he stole the woman’s car keys and drove off in her car without her consent, which would constitute a contravention of Section 112 of the Road Traffic Act, 1961.

Sgt Jacob further claimed that the car was found in another area and was burned out.

Judge Desmond Zaidan sent the accused forward for a trial by jury at the present sittings of Naas Circuit Court, which commenced on June 21 last.