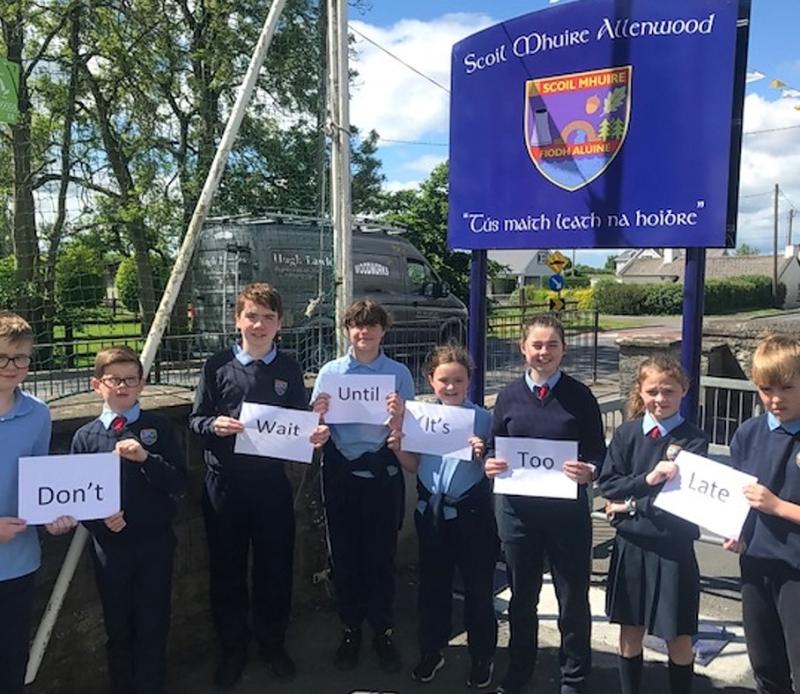 Pupils at the primary school in Allenwood

A group of parents are campaigning for  improved road safety in Allenwood and have set up a committee.

The primary purpose of the group is to make the roads safe for the children in the locality to walk to and from school safely.

At present only 15% of school children walk to the school and says parent Aisling Dunne this is because of the dangers posed  at the pedestrian crossings and the one  set of traffic lights is too close to the junction.

“There have been numerous near-miss incidents on the junction and outlying roads, which were highlighted in questionnaires that were returned as part of  a recent survey. Many children indicated that a family member was almost injured or knocked down.”

The population of Allenwood is increasing with two new housing estates being built. The school has been granted permission to build more classrooms to facilitate the children moving into the area, but the roads have not been reviewed, said Ms Dunne.

“There will be more houses, more people, more traffic but no extra safety measures. “

The parents are keen to avoid driving to school as far as because of obesity levels in children and for environmental reasons and Allenwood Safety Committee has worked closely with  the pupils and Scoil Mhuire principal Ciarán O’Toole.

The pupils have done their own traffic counting surveys and they have written letters to Kildare County Council seeking that a footpath be built from the village to the GAA club premises.

“We have great facilities in Allenwood, and we have been promised a playground and a BMX track on Station Road with no safe way to get there other than to drive.”

The committee has asked KCC to  review the layout of the crossroads and staggered junction in the village and for a footpath which will allow children to safely walk to the GAA premises.

“We have had many people help us with this request  and we are very grateful to have the support of the community,'' added Ms Dunne.