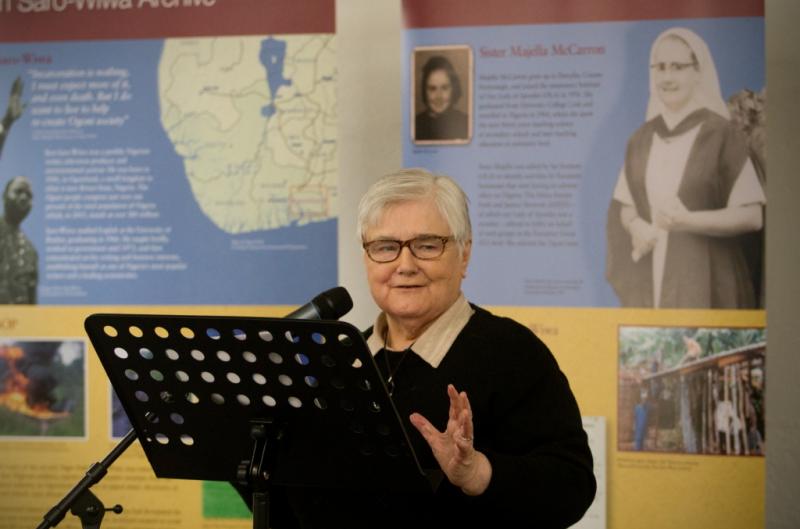 The Kildare Integration Committee in conjunction with Monasterevin library are hosting an exhibition about the life of Ken Saro Wiwa.

Ken Saro Wiwa was a distinguished Nigerian writer and environmental activist who was unlawfully executed at the hands of the Abacha regime in 1995.

Sister Majella McCarron presented an archive of letters, poems and artefacts from Ken Saro Wiwa to Maynooth University Library in 2011. Her relationship with Saro Wiwa stemmed from her time as a lecturer at the University of Lagos in Nigeria in the 1990’s. When charged by the Vatican with the task of observing the operations of western multi nationals, she began visiting Ken Sara Wiwa in the Lagos office to learn about his opposition to the activities of the oil and gas multinationals in his homeland of Ogoni and the wider Niger Delta region.

Shortly after those visits took place in 1993, Mr Saro-Wiwa was detained without charge and Sister McCarron began to correspond with him. But due to an atmosphere of increasing political violence and repression, she was recalled to Ireland in 1994 from where the correspondence continued. In Ireland, she also helped to organise campaigns for Saro-Wiwa’s release. That same year, at Saro-Wiwa’s request, she attended the prestigious Goldman Environment Award ceremony on his behalf in Stockholm and she brought documents and items she’d received from the imprisoned writer to Stockholm for an exhibition.

The contents of this valuable archive shed light on the exploitative activities of oil and gas multinationals in the Niger Delta in the 1990s and have an ongoing role in contributing lessons to our understanding of human rights, climate action and the role of writing and art in social movements.

Monasterevin Library Book club is open to new members. The book club takes place on the first Thursday of every month at 7pm in the library. For further queries, you may contact the library at 045 529239 or email monasterevinlib@kildarecoco.ie .