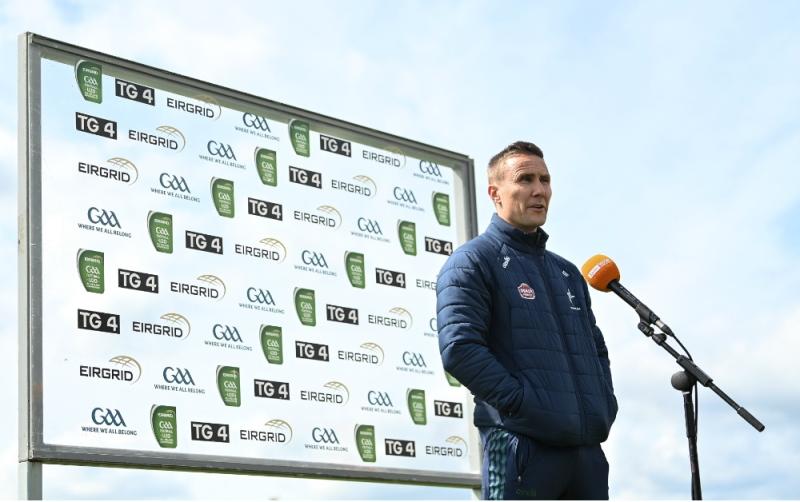 Kildare manager Brian Flanagan is interviewed by TG4 before the EirGrid GAA Football All-Ireland U20 Championship Semi-Final match between Sligo and Kildare in Cavan. Photo by Seb Daly

Kildare U20 manager Brian Flanagan unsurprisingly expects a tight game come 5pm Saturday in the All-Ireland final. Flanagan spoke at a press conference ahead of his side's clash with Tyrone this weekend and despite both scheduling and venue issues being discussed this week the Kildare manager remains focused on the job at hand.

“Tyrone have rallied late in a couple of their games to get over the line and I suppose we have done that as well. There hasn’t been much in those games but both teams have gotten through them. Tyrone have shown huge self-belief and we will have to be at our best to win the game,” Flanagan said.

Tyrone’s team was praised by the Kildare boss and soon after the topic of Tyrone’s quality came up so did the name of star man Ruairí Canavan. The Kildare boss was similarly impressed with the red-handed sharpshooter: “There are big things expected of people like Ruari Canavan and he is a fine footballer. They have quality throughout and we’re going to need to be on our game to beat them.”

Tyrone U20 manager Paul Devlin also fielded questions from the media and paid similar respects to his side’s final opponents: “Kildare are a big, athletic, hard running, and of course a skillful team. We’ll have to give a great performance to beat them. If the semi-final was hard we are expecting an even harder game this time around against them.”

There have been many scheduling concerns levelled at the GAA for the condensed nature of the fixtures for this year’s campaign. There have been remarkably quick turnarounds for a lot team’s this year and a shorter one for Tyrone ahead of Saturday’s final.

Kildare manager Brian Flanagan said: “It would have been nice to have a break after Leinster but other than that we don't mind the week after week games. The scheduling has been busy but we have enjoyed the last couple of weeks.”

On top of scheduling concerns, a lot was made into the build up to this game about the GAA’s decision to have the final played in Páirc Seán Mac Diarmada in Carrick-on-Shannon.

“At the request of the players we said we’d fight for the game to be in Croke Park. We did for 24 hours but as soon as we were informed that definitely wouldn't be the case we immediately shifted our focus back to the matter at hand,” Flanagan said.

“No team has an advantage with the venue and now all we care about is winning the All-Ireland.”

The game represents another final on the cards in what is an exciting and crucial spell for Kildare football. Kildare minors progressed to the Leinster final following a comfortable win over Wicklow, setting up a match against Dublin.

Glenn Ryan’s senior men’s team have a Leinster semi-final with Westmeath this Sunday. On the same day, Kildare ladies have an intermediate Leinster final of their own to worry about. It’s an important few days but one that could prove very fruitful for Kildare football.