A hidden history of pubs in Newbridge, Co Kildare 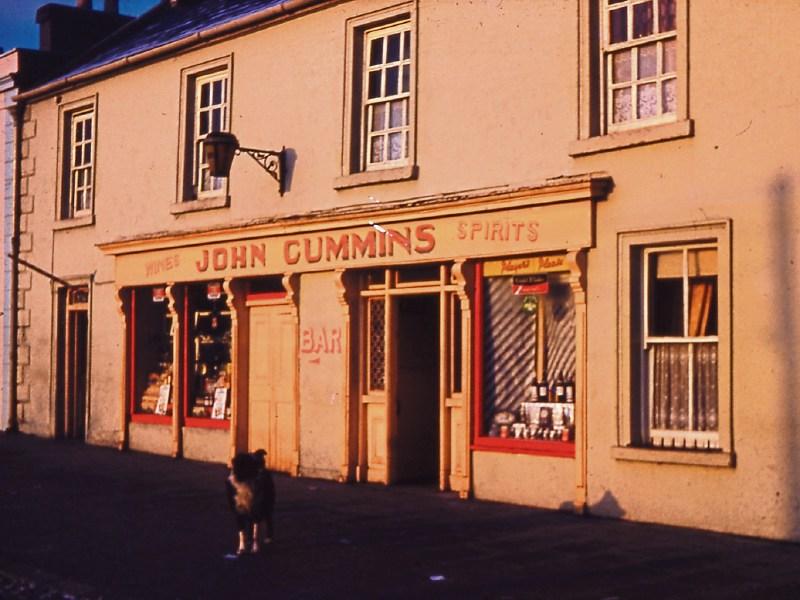 A local history project that began during the first Covid-19 lockdown in April 2020 has slowly uncovered a treasure trove of memories and images of Newbridge in times past.

Every week for the past 18 months, a June Fest committee led by Martin Connelly has featured a building in the Leinster Leader in collaboration with the Newbridge Down Memory Lane forum on Facebook. Residents of the town have generously shared old reminisces they have of local landmarks, such as pubs like Coffey’s, Con Cummins’ and the former PJ Cox’s.

Like many a local pub, they were filled with characters and family get-togethers whether it was accompanied by red lemonade and Tayto or something a bit stronger!

Brian Farrell told Newbridge Down Memory Lane of Coffey’s: “I have many good memories from 60s and 70s as a young lad on holiday from UK. A bag of Tayto and a glass of red lemonade (couldn’t get it in the UK) then my first pint of the black stuff, it was heaven. It’s always my first port of call when I visit Newbridge now.”

Dermot O’Hanlon recalled: “It was a great pub in the day. Great characters drank in there like Martin Whelan, The Colonel Maxwell and The Sheriff Delaney. Those were the good old days!”

Paula Whoriskey said: “I am very proud to be a Coffey.

“Uncle Paddy and Auntie Peggy and my father Jim were very hard-working people and ran a great pub.

"I still get people regularly telling me lovely kind things they did for people... that we were never even told about. The funny auld yarns will live on forever!”

Fiona Sully added: “I loved going in with my dad dropping of the meat order for Mrs Coffey — a real Irish pub with a warm welcome. We have spent many a great day/ night in there .”

In relation to Con Cummins’ pub, Con Cummins recalled that the section nearest Coffey’s was let to Noone’s Barbers until the early 1960s.

He added: “I believe part of the premises was let to a chemist in the very distant past. In the early 1960s, dad (John) opened a furniture business and the shop unit, presently vacant, was created for this purpose.

“He was a serious asthmatic and closed the furniture shop around 1976/77 because doctors had instructed him to stop lifting!

Martin Rowe said: “I was a barman there for a good while my grandmother was housekeeper there and my mother after that a very well-run pub and one of the last family run pubs in Newbridge.”

John Conlon said he remembered Mrs Moran had “a bicycle/fishing tackle shop to the right of Cummin’s pub.”

Hilary Tobin said: “I remember a little coffee shop to the right; went there for cake after my First Holy Communion mass in 1988!

“I’m pretty sure it had an inside door into the pub, I always remember being amazed because I thought the pub had carpet on the walls! Think it was velvet wallpaper, lovely memories.” 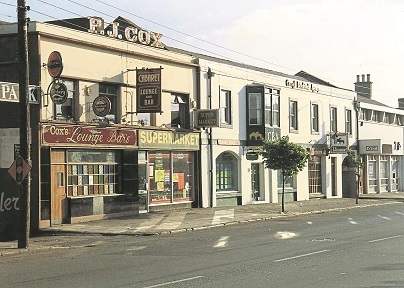 PJ Cox ran a Bar and Lounge at the bottom of Main Street (Photo: Ken McMahon)

When the June Fest committee looked for memories of three other buildings — Edward Harrigan & Sons, the Eyre Powell Hotel and Jacob’s Well — there was a similar rush of memories.

At this location in the past, PJ Cox ran a bar and lounge as well as a supermarket next door.

Recalling the premises, Noel Heavey said: “My father used to send me into Coxes Bar to get the Friday night greyhound race card.

“I think he was afraid if he went in himself, he’d ‘get delayed’!”

Paddy Blanche said: “Upstairs in Cox’s must have seen some of Ireland’s best at the time. I remember seeing Spider Simpson, Royal Flush, Gina and many more.”

Fran Benson Farrell recalled: “The bus for the B+I Ferry stopped outside to pick up a lot of people heading to England to start a new life.”

John Conlon said: “I worked there in the Cash and Carry on my school holidays when in sixth class. There were six, eight-hour days for £5 a week.”

Stephanie Molloy said: “I worked for Mr Cox when I was 13 and he had the dog track as well as the supermarket. Me and him would laugh when we’d bring all the money in from the dog track.

“We’d hide it under the last shelf where the bread was right beside the big safe and laugh — because anybody would be a long time breaking into that safe and the money right beside them!” she remembered.