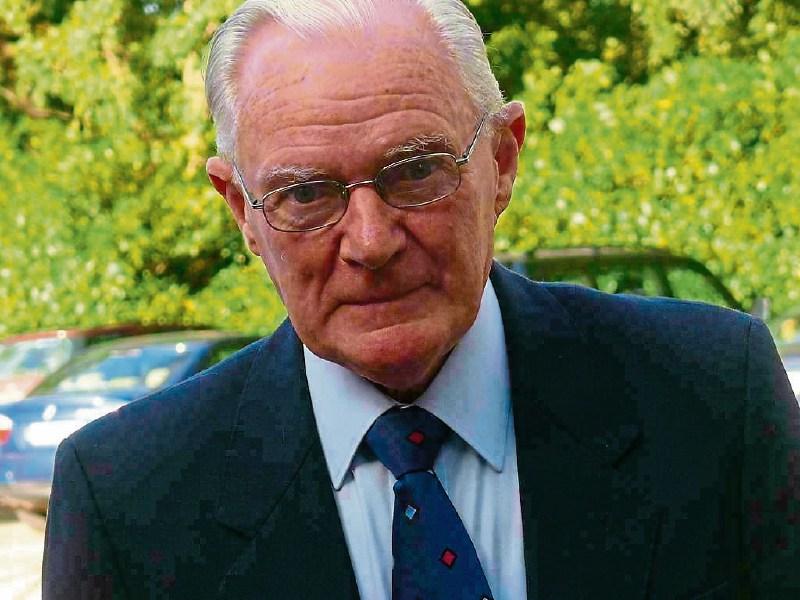 Surrounded by his eight children (predeceased by his son David), Micheál died almost exactly five months after losing his wife of 63 years, Anna, in February.

A true gentleman and Naas old-timer, Micheál’s life of 90 years was spent rearing his nine children, working hard as production manager at the Leinster Leader for more than 50 years, and later on enjoying watching his grandchildren grow up.

He was sccompanied on his journey through life by Anna, his sweetheart from the age of 17.

The Old Bog Road, his favourite song, could be heard by the crowd gathered outside to mourn Micheál as his funeral procession made its way through the town of Naas for the final time, stopping outside the Leinster Leader’s entrance where former colleagues said their final farewell.

On one of the warmest days of the year, with the sun illuminating the flowers at his graveside, Micheál was laid to rest beside Anna and David, his son. 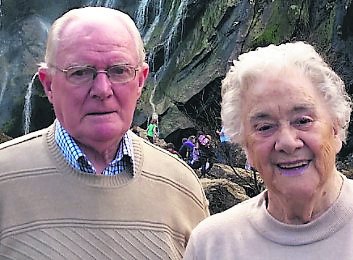 The late Micheál and Anna Kane

Born in 1931, to George and Vera Kane, Micheál was the oldest of four children, Sheila, Eithne and Dermot. His father, George Kane, a well known Garda around Naas, was originally from Mohill in County Leitrim. Reared in Highland View, Micheál, affectionately known as ‘Da’ by his grandchildren, joined the Leinster Leader as a printer at the age of fourteen.

During a bout of illness as a young man, Micheál spent a year in Peamount Hospital, where a young Anna Hogan visited him weekly.

The pair, who in later years would sit together in their chairs religiously, were married in 1957.

A disciplinarian when he needed to be, but always fair, he passed down his values to his children.

Life was busy for the Kanes in St Conleth’s Place, Micheál resurrected the boy scouts of Naas and Anna volunteered in Naas Credit Union, along with providing a happy and always welcoming household for friends and family.

They welcomed Anna’s mother Annie and later Micheál’s father George into their home and looked after them all under the one roof.

Following an illustrious career at the Leader, Micheál enjoyed delivering flowers for Bretts Florists, taking pride in his work as always.

He spent many a summertime gardening and harvesting vegetables or enjoying a walk around the Lakelands.

After many great family occasions and momentous anniversaries, Anna and Micheál celebrated a 60th wedding anniversary in 2017, one event that stood out for Micheál.

As his granddaughter, Sinead represented New York in the Rose of Tralee festival in 2017, Micheál was swelling with pride as he did with all his grandchildren's achievements. Micheál and Anna thoroughly enjoyed taking trips to New York to visit their children Veronica and Robert, and catching up with their three American grandchildren.

To his grandchildren, ‘Da’ was the perfect match to Anna’s chatty personality and would come alive when the opportunity to talk about current affairs or Kildare football came about.

In good times and bad, through the loss of their son David and granddaughter Siobhán, Micheál and Anna showed unwavering faith and remained devoted to their parish in Naas.

A man of great class and always immaculately groomed, Micheál was best known for his clever sense of humour, with his subtle wit and cheeky grin.

The word most used to describe him around the time of his passing was ‘gentleman’.