Kildare Cycle Café scheme gets on its bike in Crookstown 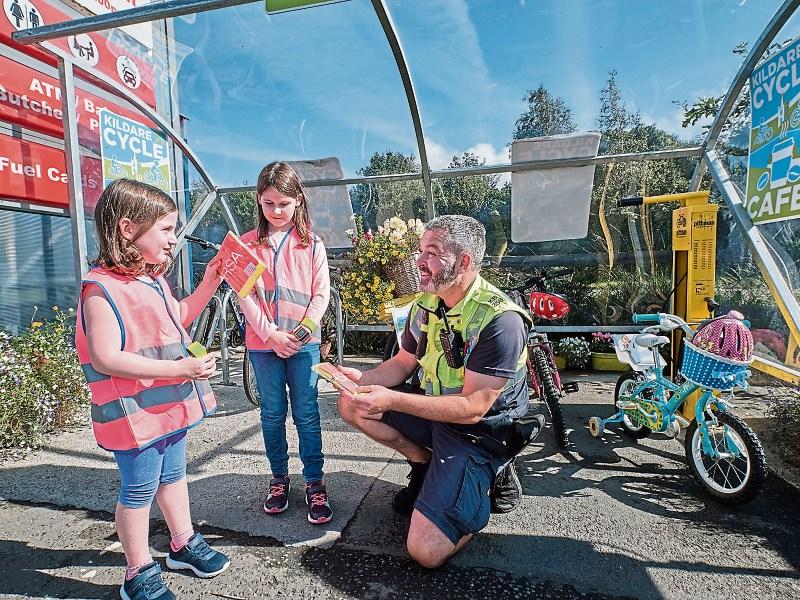 Kildare County Council launched the first stage of the Cycle Café scheme on Saturday, September 18, as part of National Bike Week. A Cycle Café allows cyclists and cycling groups to stop-off at designated locations for a break along their cycling route.

Cathaoirleach Naoise Ó Cearúil launched the Cycle Café scheme from O’Reilly’s Crookstown Service Station on Saturday afternoon. There was a hive of activity at the café from early morning to late afternoon as members of the cycling community, from around the county and further afield, visited the Cycle Café.

Funding for the scheme was received from the Department of Rural and Community Development.

The Cycle Café concept was first introduced in County Kildare at Fogarty’s local shop and Post Office in Ballymore Eustace as the ‘Cartweek Cycle Café.’ Since then, Kildare County Council has approved 12 other locations as ‘Designated Cycle Cafés, as part of a countywide promotion and engagement among cyclists, cycling groups and the cycling community.

A Designated Cycle Café provides cyclists with a ‘pit-stop’ along their cycling route. Each café has a safe and secure bike parking station, a universal took kit and bike repair unit and are on site at various services stations and businesses which themselves, provide a variety of facilities such as hot and cold food, tea, coffee and cold drinks, bathroom facilities and indoor and outdoor seating and rest areas.

Speaking at the launch, Kildare County Council Cathaoirleach Naoise Ó Cearúil said “The interest in cycling around Ireland has increased greatly over the past year or so, and these Designated Cycle Cafés are a great addition to the cycling community. It’s a meeting point, a focal point and a place where cyclists or cycling groups can come for a break on their trip. It’s wonderful to see so many people out on their bicycles and enjoying a cycle and I encourage everyone to visit a cycle café along their route when cycling.”

Planning, installing and completing the Cycle Café’s scheme has not been exempt from the increased pressures, supply demand and slow delivery of equipment or products for the cafés as a result of the current pandemic as we moved from one lock-down to another.

“There has been great collaboration between Kildare County Council and the various Designated Cycle Café owners in providing these ‘pit-stops’ for cyclists, and while the Cycle Cafés won’t solve all the issues, problems and challenges encountered by cyclists on their journey, it’s a positive starting point and it’s just one aspect of the services which the council is providing for cyclists in the community.

“Cycle Cafes bring a variety of benefits to the community in terms of mobility, tourism and trade. The launch of the cycle café scheme also coincided with EU Mobility Week which in many ways are linked to cycling because cycling itself allows us to choose and use other modes of transport, and the best part about cycling is, in many cases, it doesn’t cost all that much and it’s great for your health, well-being and the environment” he said.

The council plans to unveil additional designated cycle cafés over the coming weeks as part of a countywide promotion on cycling and walking activities in the county.