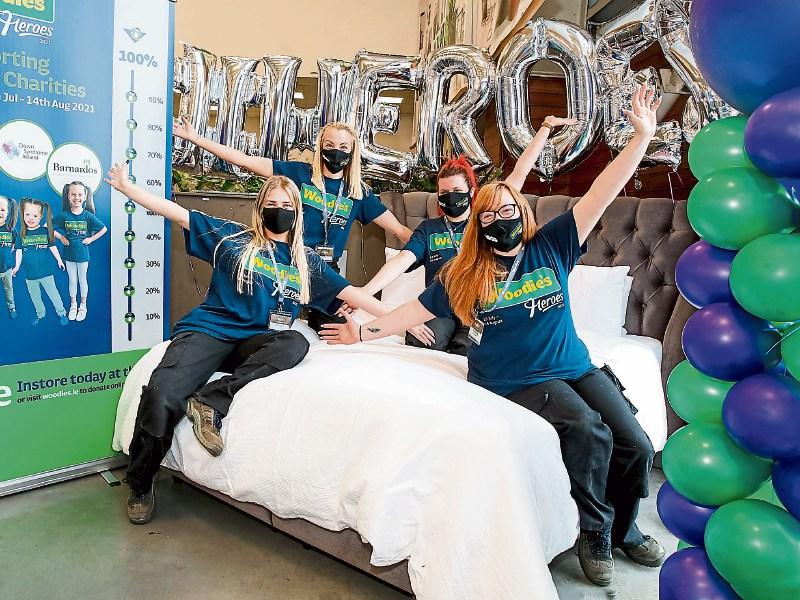 Woodies Naas staff member Una Keenan told the Leader: “We’d love people to pop in and make a donation and they could be in with a chance to win a luxury king-sized bed which is on display in the store.”

Last year, Woodie’s Heroes surpassed its target of €250,000 and raised over €417,000 despite the challenges faced by the communities around Ireland due to Covid-19.

This summer, Woodie’s will build on this success and hope to reach their goal of €500,000 thanks to the generosity of their customers and suppliers, and the support and enthusiasm of Team Woodie’s, including their colleagues in Woodie’s Naas where anybody who gives a donation will be entered into a draw to win a luxury king-sized bed.

You can show your support by donating at the till in store by adding €1, €2 or €5 to your bill.

You can also donate online at www.woodies.ie.

You can also text to donate €4 to one of the Woodie’s Heroes charities.

Simply text one of the below keywords to 50300 to donate:

The teams will visit all 35 Woodie’s stores and collect their fundraising cheques for the charities.

Woodie’s has stores in Naas and Newbridge as well as in nearby Lucan and Tallaght.

The first store was opened in June 1987 at Walkinstown followed by Glasnevin, Sallynoggin and Cork in 1990.

Since 2017 Woodie’s has been recognised in surveys estimating the Best Workplaces in Ireland and A Great Place to Work.