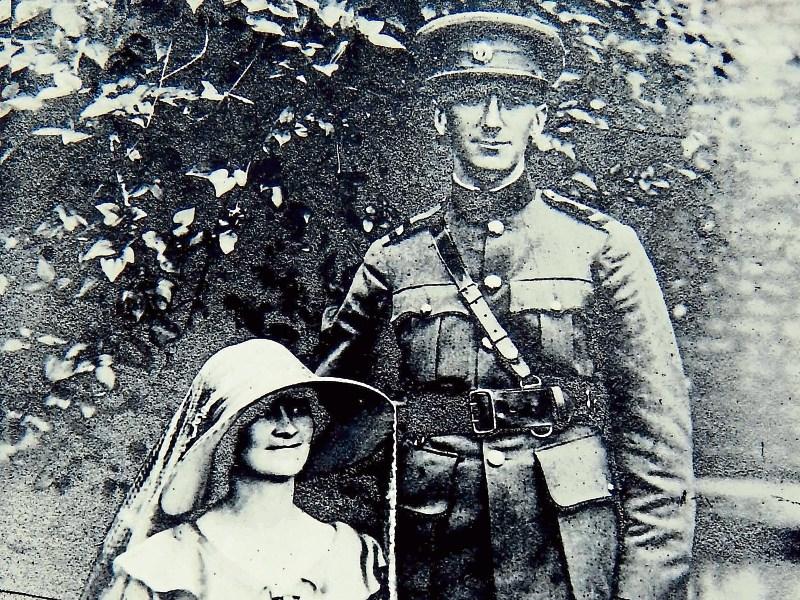 The wedding of Major Colgan and Ann Shortt, which took place shortly after his return from the Paris Olympics

Shortly after the national army was put on a sound footing by the Government of the Irish Free State, moves were put in hand to promote sport of all kinds, but excluding the competing ‘foreign games’ of soccer and rugby football from the remit.

In 1922 Major General Hogan was appointed chairman of the new Army Athletic Association and Maynooth-born, Commandant Patrick Colgan — no relation to this author — was appointed secretary of the organisation, a post he held for many years.

Colgan had been commandant of the Maynooth Company of the Irish Volunteers who travelled to Dublin in Easter Week 1916.

Within a year, an attempt was made by Father Cotter, of the Cork Command, to have the ban on soccer and rugby rescinded, saying that many who joined the army played these games and that at least 35% were being excluded by confining the army to GAA sports.

Actually it wasn’t confined to GAA sports, for Colgan had secured the inclusion of golf and tennis within their ambit!

Colgan was a player and did everything from manning the gates at matches in North Kildare to refereeing national hurling and football matches in Croke Park and was secretary of the Kildare County Board of the GAA.

He was on the council of the Amateur Boxing Association and put on tournaments with seating for 2,000 in Portobello Barracks (where he lived from 1920).

Under his remit, army sports included children’s and women’s events. His administrative ability was greatly admired.

It was the policy of the new Free State Government to make its existence felt, so in April 1924 a meeting of the Irish Amateur Boxing Association, of which Commandant Colgan was a council member, deputed him and another to arrange a tournament, with the object of sending a boxing team to the Olympic Games due to be held in Paris that summer.

Similar moves were made to send a team of swimmers, soccer players and athletes.

So it was that on the evening of July 6, 1924, the Irish boxing and swimming competitors in the Olympic Games left Westland Row Station by train for the ferry from Dun Laoghaire via England to Paris, and were given an enthusiastic send off. All but two of the eight boxers were in the Free State Army.

The men were accompanied by Commandant Colgan, secretary of the Army Athletic Association and eight others.

Ireland won no medals in their first Olympic event, as in seven other Olympics out of 22 since 1924. But there was a political gain: in 1930, France was the first country to establish a diplomatic mission — a prelude to an embassy — in Ireland. They chose Leixlip Castle as the French Minister’s inaugural residence.

Major Patrick Colgan was the youngest of his parents’ 11 children, eight of whom survived to adulthood. He was born in an extended cottage, 28 Double Lane, or Leinster Cottages, Maynooth (now called Buckley’s Lane).

In 1924 he married Ann Shortt, of Templemore, in Rathmines on his return from Paris. The couple had no children.

Of his siblings, only the eldest brother, John, 18 years his senior, and the eldest sister, Catherine, married (Maher, of Stacumny) and had children.

When I tracked them down, they knew nothing of their illustrious ancestor.

Patrick Colgan was promoted to the rank of Major (now called Lieutenant-Colonel) in 1940. On his retirement from the army in 1946, the couple bought a half share in Muckross Park Hotel, Killarney, which they managed until old age.

Ann or Nan Shortt was an international bridge player and she was treasurer of a benevolent organisation which raised funds for the families of poor or disadvantaged soldiers.

In recent years, the current owners of Muckross Park Hotel named the restaurant in honour of the Major, and displayed photographs of the couple.