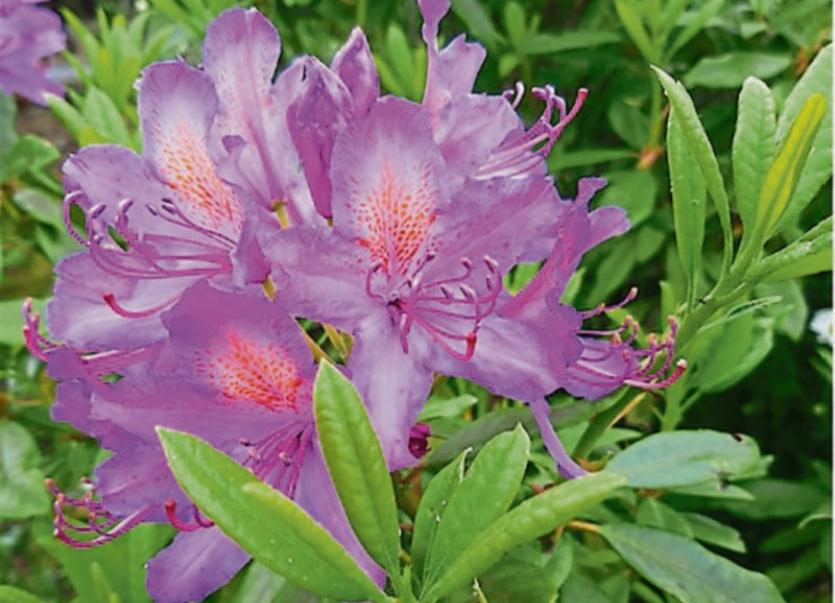 While this week's species has a beautiful flower it is also causing major environmental damage to our wild habitats.

First introduced to Ireland as an ornamental plant in the 18th century rhododendron (róslabhras as Gaeilge) is considered by Invasive Species Ireland as an established invasive terrestrial species. The attractive flowers grow in clusters with bright pink-purple flowers blooming from May-July. Its dark green, evergreen shiny, hairless leaves are long, narrow and oval in shape. The plant can grow to a height of 8 metres and prefers acid soils. The problem started when the plant began to escape our gardens either through seed dispersal or vegetatively and established in Ireland’s wild habitats.

Rhododendron had the ability to out compete native shrubs within our woodlands and formed dense thickets that in turn blocked sunlight from the woodland floor. The West of Ireland is particularly affected with Killarney National Park being one of the notable sites threatened by the invasive rhododendron. Much work in now ongoing to support our wild spaces by clearing its presence from habitats. This work is both labour intensive and time consuming. The dense thickets that have formed make it difficult for machinery to access sites so work is done by hand.

In year one the rhododendron plant is cut as close to the ground as possible, the material is then chipped and removed from site, however with the abundance of seeds remaining in the soil successive annual management is required in areas cleared to remove new growth. While rhododendron is one example of an invasive species others include, but are not limited to, japanese knotweed and Gunnera (giant-rhubard). Managing invasive species is done by local authorities, it is never recommended you begin work on clearing an area affected by an invasive species without first seeking advice on the best control method and management of cut materials.

If you would like help identifying local wildlife or indeed to share your images of local wildlife encountered to be used in a future wildlife watch contact me on 045-860133 or bogs@ipcc.ie