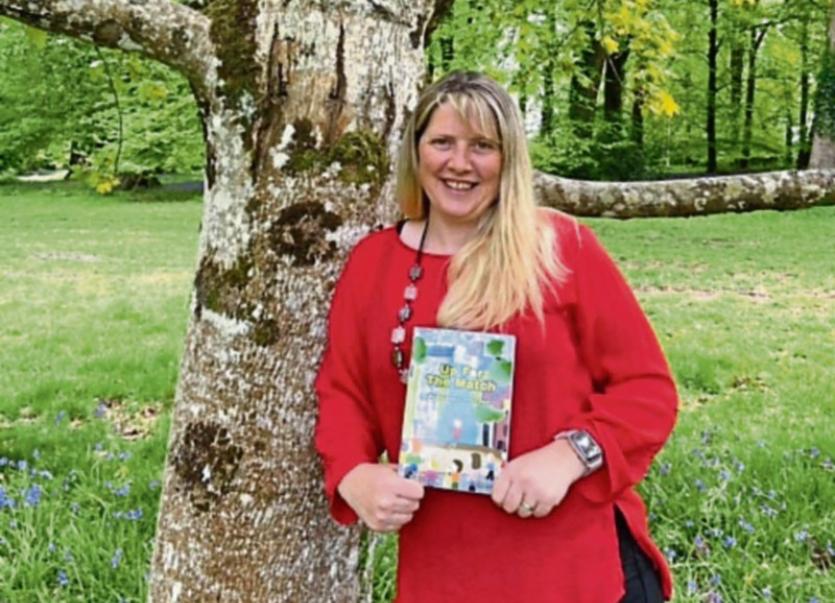 Eleanor Merriman with her new book

Inspiration comes in many forms, but Naas native Eleanor Merriman has drawn on her own cherished memories of attending GAA matches with her grandparents for her first book.

Now living in Shanahoe, Co Laois, the mum of five put her time to good use during lockdown.

“Every year I would see somebody on the Late Late Show talking about how they wrote a book. I thought, if they can do it, I can do it,” she said.

“I did a small creative writing course. It gave me positivity and focus. During the first lockdown, I was so fed up. It really dragged out into September, October and November... Then in January I decided to do something about it. I drew on my positivity and got really focused.”

Looking back at the happy times she spent with her nanny Eileen and grandad Shamie attending Kildare and Naas club matches, she decided to write a children’s story about the whole adventure.

Her grandad, who is now sadly deceased, was a well known referee and footballer for Naas. In her youth, Eileen, who originally hails from Prosperous, played camogie.

Eleanor also played football and soccer, but she pointed out that ladies football was not as strong back then as it is today. A keen sports woman, she now teaches yoga and pilates.

“I was always going to matches, collecting all the balls from behind the goals. I remember the celebrations when Naas won the championship in 91, when Terry and Johnny McDonald were playing,” she recalled.

Up For The Match is targeted at children who are aged between eight and 12 years old.

“It is based on the GAA, and all that comes with the excitement of travelling the country following your local and county team, with the dream of making it to Croke park,” she explained.

The main character is a young boy called Tommy who has a lovely relationship with his grandparents who are passing the love for the GAA down through the generations.

Eleanor is a busy mum and home-schools her children who are aged from three years old up to 12.

Eleanor wrote the book with reluctant readers and dyslexic children in mind. Coming from a place of experience, the writer is dyslexic herself, as are three of her children.

It is written in a special dyslexia font which makes it easy to read.

She pointed out that GAA is in every second house in the country and it also promotes health and fitness for children.

“Along with those memories of following my county around to games came the excitement of reading the write up after each match in the Leinster Leader,” she said.

There are also Kildare references in the book with the round tower in Kildare town making an appearance.

Illustrated by 14-year-old Mya Foley, the book also features fun facts on the GAA and the counties of Ireland.

The book is dedicated to her grandparents and baby Méabh Hannafin, who was born sleeping when she arrived into this world. The daughter of her best friend, Siobhán and JP, Eleanor will be making a donation from the proceeds of the book to Féileacáin, The Stillbirth and Neonatal Death Association of Ireland.

This is a not for profit organisation that provides support to anyone affected by the death of a baby during or after pregnancy.

The book is self published and is available on www.seanchuabooks.com You can also find seanchua books on Facebook and other social media.

Up For The Match can also been found at Barker and Jones, Naas; Woodbine Books, Kilcullen; the bookshop in Maynooth; Farrell and Nephew, Newbridge and from the Kildare County Council offices in Naas from July.

Eleanor's grandparents, Eileen and the late Shamie Curran pictured at a Kildare match in Croke Park during the nineties