Newbridge estate visited by ducks after flooding on green area 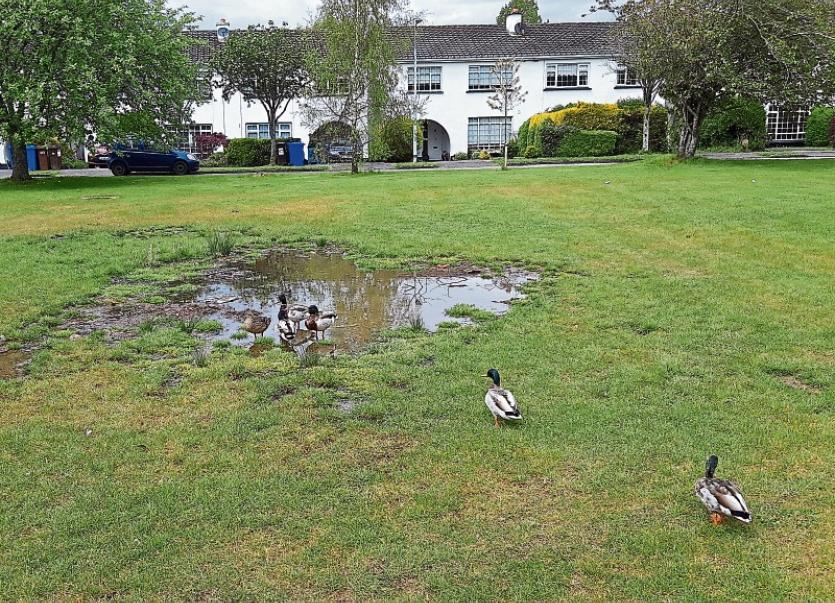 Ducks recently visited a green area at The Oaks, Newbridge, where a pond has formed on the estate's green area

Kildare County Council has said it is difficult to hire contractors for some projects around the county.

District engineer for the Kildare Newbridge Municipal District, Brenda Cuddy, told the May meeting that landscapers in particular are proving to be scarce.

Cllr Fiona McLoughlin Healy had raised the issue of landscaping work in The Oaks are of Newbridge where a recent flood attracted an unlikely visit from ducks.

Ms Cuddy said that only essential and emergency works were permitted in recent months due to bans on construction activity.

She added that there is a lack of availability of some contractors to carry out some works.

“We are trying to source landscapers and contractors for works on roads and footpaths.

“Two landscapers I have contacted have changed directions in their careers since the pandemic.”

District manager Joe Boland said it can be frustrating for some local residents when landscaping is not carried out following works in their area.

He also pointed out to recent inclement weather as a factor in some projects bein delayed.

Ms Cuddy said works being carried out at the moment include drainage works completed in St Evin’s Park, Monasterevin; footpath repair in Castle Park in Kildangan and patching in Newbridge as well as the surveying and replacing broken signs and bins.

She said roads improvement works have begun in the Raheens area of Caragh.

Councillors also heard that the 2021 programme of works funded by the Local Property Tax was being prepared in line with approved budgets.

In the area of roads maintenance, general surface dressing in selected areas is due to commence on June 14.

He said: “This has been an exemplary project.

“Traffic kept moving and businesses were allowed to carry on a unusual.”