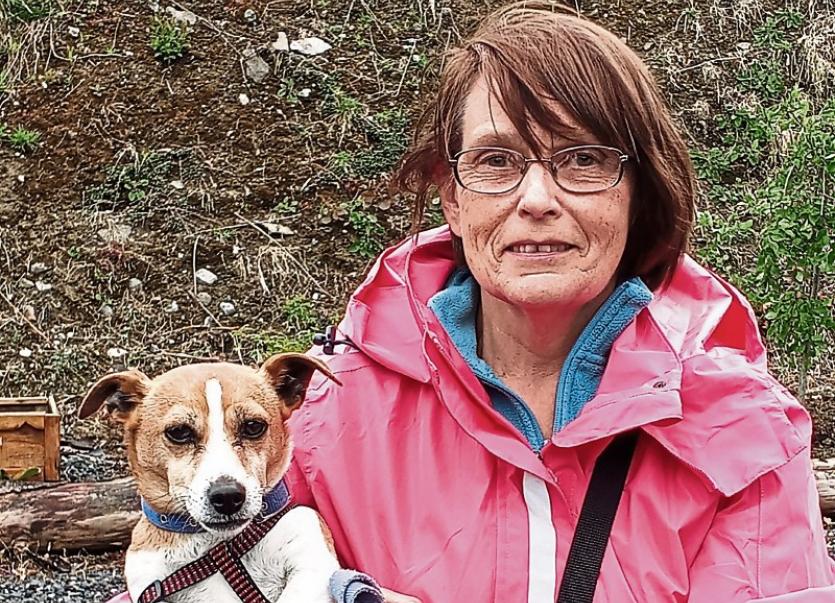 Anne and her dog Murphy

Carbury woman, Anne Heffernan, who has been missing her Aussie-based, 2½-year-old grandson, in particular, during lockdown kept herself busy by walking, aiming to reach a 1000km target, all within the confines of the 5km limit.

Since mid-January she has been building her weekly kilometre total, walking the quiet roads near her home close to the Offaly border, mostly just meeting a few cars or tractors along the way, her only company being her little Jack Russell, Murphy.

Having completed a milestone of 800km already, Anne is delighted with her achievement and hopes to reach the overall 1000km target by the end of May.

That distance is equal to having walked from Malin Head to Mizen Head and from Dublin to Galway — the length and breadth of Ireland. The post-Christmas blues began to set in for Anne in early January, like for many others throughout the country. Having over indulged during the festive season and feeling sluggish, with only the dark, dreary weeks of winter stretching out ahead and with little to look forward to, Anne took stock; then set plans in motion to keep her spirits up.

Her earnest wish was to see one or other of her two children — but that could’ve been years away, as one lives in Australia and the other in Canada.

Anne needed a focus, a way to help herself cope over the coming months. And if she could help others too, all the better. She’d been looking forward to the Get Ireland Walking season beginning again and had decided to join in with a local walking group, over the winter months. But, of course like everything else, such local groups too were again in lock-down.

Getting back into the stride of walking everyday during January, she set herself the challenge of building her stamina and endurance, as training for completing the last 100km of the Camino de Santiago, whenever travel might again be permitted, something she had wanted to do for some time.

It was also the ideal opportunity to use the challenge as a fundraiser to lessen the hardship of life for those she had lived and worked among in Haiti, a few years ago. They had been on her mind since the pandemic began and she wondered how on earth they would survive it, living in overcrowded conditions, in nothing more than flimsy, make-shift shacks, where families of 10 and more were commonplace.

According to Anne, their homes have no electricity, no running water and little or no furniture or cooking facilities. 25% of households have no toilet; for many, their homes are merely shelters from the beating sun and the roaring hurricanes.

Now that Anne has almost completed her 1,000km walking challenge (equal to the longest of the Camino routes) she is hoping her fundraising efforts will be as successful as her walking in order to assist with easing the burdens of life of the forgotten people of North West Haiti, as they strive to contend with hunger, lack of healthcare and sanitary facilities as well as Covid 19.

Some 80% of Haitians live below the poverty line and less than half of its 11million population have access to clean drinking water. And there’s little sign of a vaccine in sight for them yet.

“I’ve no idea why I was born and live in this part of the world, nor why those I met in Haiti are based there. All I know is that whatever a bad day looks like for me, it is light years away from the poverty, lack of opportunity and infrastructure that makes life more difficult than most of us can imagine for those living in Haiti,” she explained.

If you would like to help Anne on her journey, you can donate a little or a lot to the Haiti account at

Every cent will go directly to assist Haitians living in Jean Rabel, a remote area of North West Haiti.