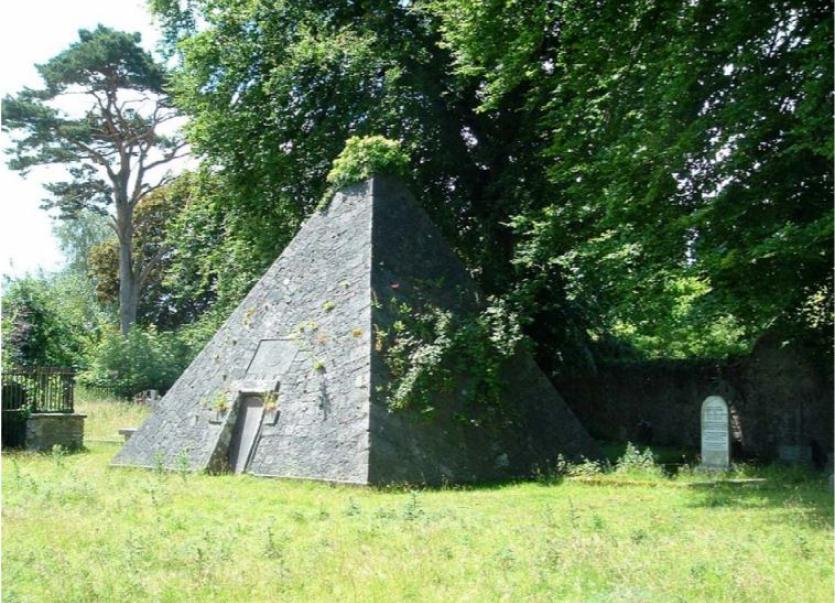 One of the pyramids in Maudlins Cemetery in Naas

County Kildare has received €23,000 for three projects under special grant schemes run by The Heritage Council.

Under the Community Heritage Grant Scheme, €18,500 has been allocated to community groups and not-for-profit organisations in Kildare. Follies Trust received €8,500 for the conservation of iron doors on two pyramid mausolea at Maudlins burial ground, Naas. Tea Lane Graveyard Committee was awarded €10,000 to carry out conservation works to the Grattan Family Vault Celbridge.

Meanwhile, under the Heritage Council’s Irish Walled Towns Network (IWTN), €5,000 is earmarked for interpretation initiatives, which will protect and preserve the history and heritage of Ireland’s walled towns. Kildare Town Heritage CLG has been allocated €3,500 for its project 'Interpretation for the three abbeys of Kildare.’ The aim of this project is to raise public awareness of the three great abbeys of Kildare. An interpretive panel will be installed at each abbey site with illustrations and a QR code to link back to audio about the site.

In 2020, the IWTN funded a reconstruction illustration of medieval Kildare (late 15th and 16th centuries). Powerful characters such as Richard de Clare, William Marshall, William de Vesci and the Fitzgearld Earls of Kildare left their mark on Kildare by building fortifications and funding large abbeys. Kildare’s town walls were damaged during the Nine Years War in 1598.

Meanwhile, Castledermot Local History Group was allocated €1,500 for its project ‘Telling Tales: Heritage Signage for Castledermot (Phase Two)’. Phase Two of this project will see the installation of an interpretative panel on the medieval and post-medieval history of the garden at Castledermot Library. Since 2012, the Heritage Council, through the IWTN, has provided over €23,000 for the interpretation and conservation of Castledermot’s town walls.

By 1295, Castledermot had a seven-year murage grant that allowed the townspeople to take a toll from anyone entering the town. The toll money was then used to fund the building of the walls. The town was sacked in 1316 by Edward the Bruce. The only Irish example of a Viking hogback burial stone can be found in Castledermot.

A walled town is a town that had walls and features like gates, towers, and earthen ditches built around it, to defend the occupants, and control the flow of people and revenue in and out of the town. While some walled towns date back to the Viking period, the majority date from the Anglo-Norman / medieval period.

Minister for Housing, Local Government and Heritage, Darragh O’Brien, TD, stated: “I am delighted to note today’s announcement by the Heritage Council. This funding is essential to safeguard our heritage while also providing much needed economic stimulus and providing employment in the sector. It is also a significant investment in this Government’s commitments under the Programme for Government to promote and protect our heritage.”

Commenting on the announcement, Minister of State for Heritage and Electoral Reform, Malcolm Noonan, TD, said: “I would like to acknowledge the fantastic work of the Heritage Council in supporting community heritage through this important scheme. As the scope and scale of these projects illustrate, communities play a vital role in caring for all aspects of our heritage. The new national heritage plan, Heritage Ireland 2030, which will be published later this summer, will recognise the role of communities in safeguarding our heritage and ensure that they continue to be supported.”

“It is especially gratifying that the primary work of The Heritage Council, in preserving and nourishing our history and traditions, has a spin-off by way of putting investment into communities around the country.”