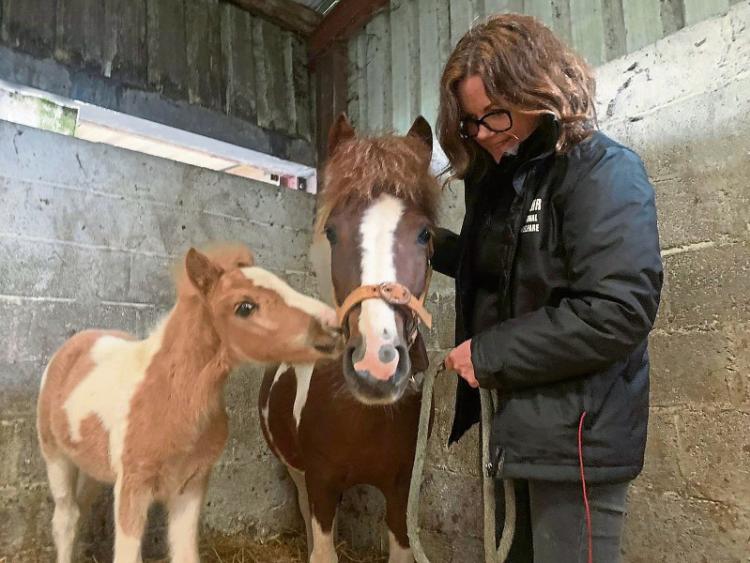 Georgia and her foal Nicky with Martina's sister Deborah

A rescue pony, who went missing after being sold by her adopted owner, has been found and returned to a Kildare animal refuge a year after her dissapearance.

Georgia and her new foal were reunited with the volunteers from My Lovely Horse Rescue (MLHR) on Sunday, April 18.

“We were thrilled. We couldn’t believe it. For a whole year, we had been wondering and worrying about what had happened to her,” said Martina Kenny, co-founder of MLHR, which is based in North Kildare.

She told how Georgia was born at the centre in October 2014 after her mum and her brother had been rescued from a site in Dublin.

The little pony was fostered for periods and was also trained as a riding pony.

In February 2020 she was adopted by a family in Munster.

“We always keep in touch with the new owners to see how they are getting on. Some people keep us updated so we don’t need to be contacting them, but our team of volunteers sit down every so often and ring the people we haven’t heard from to see if everything is all right,” she added.

Just four months later, when the volunteers followed up for the second time with Georgia’s new owners, they were informed she had been sold.

“This is in breach of our adoption contract, which this man signed. If any new owner doesn’t want the horse, they are not allowed sell them, they can give them back to us,” she added.

She said Georgia had been microchipped and MLHR also retained her passport.

MLHR then issued an appeal on social media which garnered national attention but alas, despite several possible sightings, Georgia was never located.

“A few times we thought we might have found her. We rushed out to Limerick, and a few people thought they had seen her in various locations, but nothing came of them,” explained Martina, “Then last Sunday (April 18), we were contacted by someone who saw an add on Done Deal and we knew it was her when we saw her picture.

“She was well looked after and her owner had no idea she was a MLHR pony. We had her chipped and had her passport we were able to prove it was Georgia. It was brilliant,” said Martina.

Now, Georgia is settled in with her little seven week old foal, who has been named Nicky. “We were wondering if she would recognise the place. She even whinnied in the box when we came back. It’s so good to have her safely back home,” said Martina.

She stressed that laws are there to allow the proper change of ownership when ponies are sold from person to person, but they are not enforced, which is not the same for livestock such as cows.