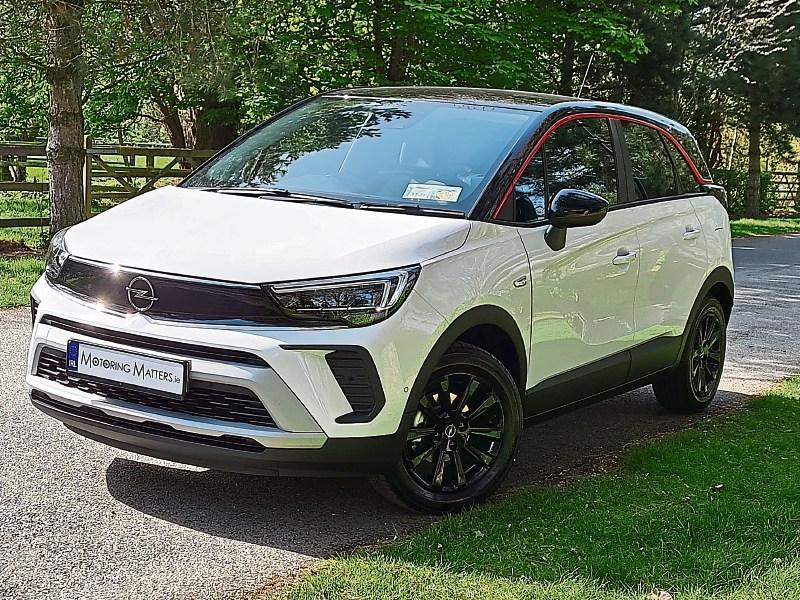 The new Crossland is the first model to adopt Opel’s unmistakable new ‘Vizor’ face, which was showcased just a few months ago by the new Opel Mokka (due on sale in Ireland soon).

Physically integrating the grille and headlights, the Opel Vizor on the new Crossland extends in one single sweep across the front of the vehicle, and provides the fascia with a reduced amount of elements, while Opel’s lightning-flash emblem dominates the centre. The Vizor will become a hallmark of all Opel models in the course of the 2020s with the idea of further integrating new technologies along the way.

At the rear, new dark-tinted tail-lights enhance the signature Opel wing light design, and the new high-gloss black tailgate surface (available in combination with the black roof) makes the new Crossland look wider and stronger. As with the forth-coming Mokka, the Opel Crossland dispenses with the X-appendix that adorned its predecessor.

Dynamic Driving Experience
In order to prove that the new Crossland is much more than just a pretty face, Opel’s engineers have further developed the chassis and steering of the car to deliver a dynamic driving experience. The new Crossland is crisp and compact on the outside, but very spacious and versatile on the inside, with sliding rear seats (Elite trim) designed to enhance cabin or boot space — depending on the need. With the rear seats in their rearmost position, an impressive 410-litres of space is on offer.
However, this can be extended to 520-litres with the rear seats in their foremost position, or increased to a vast 1,255-litres with the rear seats folded flat.

Test Car
My test car was an Opel Crossland 1.2-litre 83bhp SRi model, which was finished in White Jade solid paint, with contrasting black mirror casings, black roof and black alloy wheels. The 1.2-litre petrol engine produces 83bhp and 118Nm of torque, enabling the 0-100km/h sprint to be completed in 14.0-seconds, on the way to a top speed of 170km/h.

With WLTP fuel consumption as low as 5.9l/100km on a combined driving cycle, the new Crossland promises to be easy to live with, and easy on the pocket too. The Crossland’s light steering makes it easy to nip in and out of lanes of traffic in an urban setting, and also helps with low-speed manoeuvres, while maintaining excellent stability at motorway speeds.

The five-speed manual gearbox in my test car was slick and precise in its operation, and all major controls inside the car are within easy reach of the driver. The Crossland’s interior fit and finish is excellent, with plush, soft-touch materials used throughout the cabin, along with some neat chrome and gloss black finishers for an upmarket look.

Headroom in the cabin is excellent, while foot space under the front seats provides additional legroom for rear seat passengers. Additionally, the central tunnel that runs along the Crossland’s floor isn’t as pronounced as it is in its competitors, thereby ensuring the middle rear seat passenger doesn’t lose out in terms of leg room either.

Pricing
Pricing for the new Opel Crossland starts at just €22,395, with my test car specification priced from just €23,895.