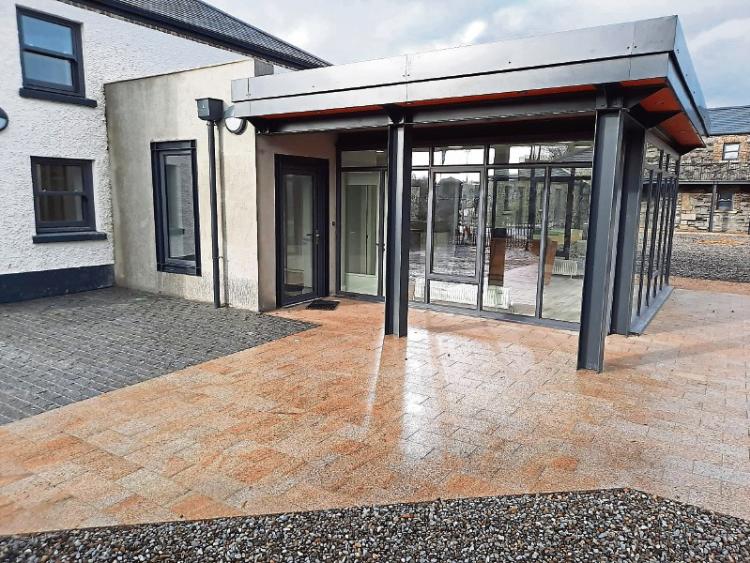 A development for young homeless people consisting of a dozen apartments near the Bundle of Sticks, on the Newbridge side of Naas, has been completed.

It is not known when exactly the first resident will move in, but it is likely to be early May.

The original planning application was modified to change the site entrance from the east side to the west side of the site as well as moving the location of the car park.

The building, known as Jigginstown Manor, occupies about one acre but the total site takes up about six acres.

Each studio apartment measures 40 square feet, with individual kitchen and showers and all of the units will be furnished.

The project was launched by Homeless Care, a charity established in Naas in 2014 to provide care and facilities for young adults primarily in the age bracket of 18-25 years (though in some instances the clients may be older than 25).

The group has depended on donations and fundraising to get the project of the ground and the final overall cost is about €3.8m, which was about €1m higher than an early estimate.

The intention from the outset was that when it opened it would be run by a licensee, likely to be a specialist charity organisation. Homeless Care was in discussions with three potential partners. County Wicklow-based Tiglin, with which Naas businessman Aubrey McCarthy is associated, was eventually appointed.

It was always planned to have the facility managed by a social care professional.

Mr Cradock told the Leader that while it is hoped that most of the people taking up places, for the most part 18 year olds leaving a care setting, will be from County Kildare, the intake will be managed by Tiglin.

“Our role was to develop the facility. We don’t see that we have the expertise to run it,” said Mr Cradock.

Tiglin’s licence to run the centre lasts for three years. The facility will prepare those living there to return to the community.

The initiative will see that the young people who use the facility undergo training. This is in response to the fact that many people come out of State care aged 18 and are left to care for themselves.

Some 6,500 children are currently in foster care across Ireland and some 40% of these leave the foster care system without any training or direction about what faces themselves once they leave care.

Homeless Care was set up to help young adults who find themselves homeless after leaving State care, by “providing facilities and training to enable them to reintegrate within the community”.

The organisation bought the old farmhouse and outbuildings on six acres in September 2016.

There was an objection to the plan which cited the proximity to the public road adding that any access from the proposed development is extremely hazardous.

The objector also submitted that it is one of the busiest roadways in the Naas area “caused by the confluence of traffic from Newbridge and traffic exiting from the M7 back in towards Naas.”

Centre manager Dr Steve Bradley said the idea behind the centre is that it will be transitional.

“The people coming here will be supported in many ways to make the next step in their lives.

“It is not a long term housing project, the amount of time spent by an individual will be in the region of three to five years,” he said.

Every resident will have their own front door and at the same time there will be a community within the site which, unlike some others, will not have a security presence.

Some of those arriving will need to learn to cook, some may be interested in vocational training while others will seek to study for the Leaving Certificate or to attend a third level institution — Dr Bradley has a link with Carlow IT and Tiglin has a long association with the college.

“Whatever their needs are, we will work to support them and there will be social care staff on site 24 hours a day,” he added.

He said that people living in County Kildare will be prioritised for places and discussions are ongoing about how this will be managed.