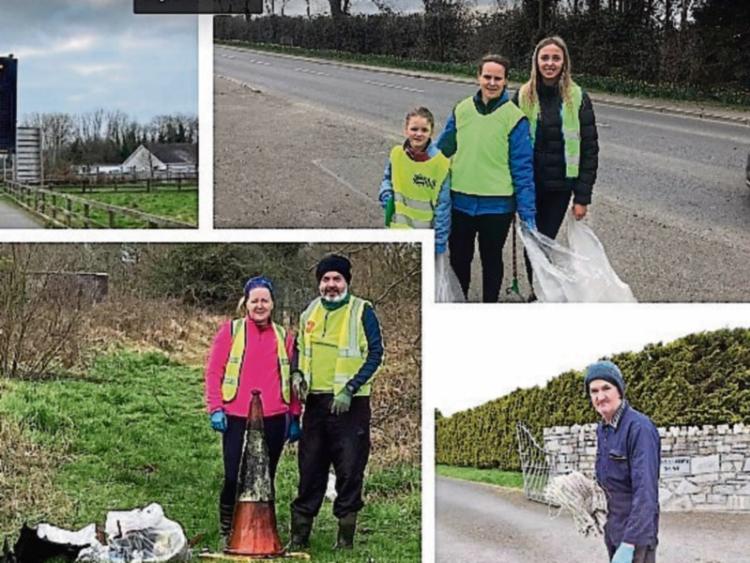 Over 2.5 tonnes of rubbish has been removed from roadsides, hot meals delivered to those who need it, and local businesses buoyed by local support as the Carbury community united in the face of lockdown after lockdown.

When the blight of Covid first stalked Kildare in 2020, bringing with it a wave of fear and uncertainty, volunteers stepped up. The Carbury Community Facebook page was born.

“There were obviously a lot of people that couldn’t get out, they couldn’t get their medication or do their shopping,” said Derrinturn resident, Paul Mahon.

He explained how everyone pulled together. St Conleth’s National School fundraised and donated money to Daniel’s Foodstore for food for people who needed it in the locality. It was delivered by volunteers to people’s homes.

Then job vacancies were advertised on the page as well as local businesses who struggled through the lockdowns.

“The clean up developed from that,” explained Paul.

In early March, fed up of seeing rubbish strewn in ditches and bogs across the neighbourhood, residents came out in force (in a socially distant manner) to clean their own roadsides and areas.

“From the road to Drehid down to the mushroom factory, we found a number of bags that had been there a while,” he said.

“The sad thing was the vast number of the materials we collected were recyclable. There were tins, cardboard and it looked to have been separated, it was like someone had just paid someone to come along and take it away. Then they just dumped it in on the roadside.”

He said it was apparent that some of the rubbish collected had travelled some distance with election posters from a Sligo candidate found amongst the litter.

Paul praised all the people who got out and did the work.

The collection area was about six to ten kilometres squared from the Carbury roundabout down to Edenderry Rugby Club and back down towards the mushroom factory and Drehid.

“The amount of work put in was simply amazing and as the pictures demonstrate, we collected a lot of waste.”

The mountain of waste totaled 3.2 tonnes and Kildare County Council agreed to collect it.

Speeding is another issue of concern through Derrinturn.

“The road was resurfaced recently, but the four ramps weren’t touched so we are concerned about that,” he added.

Better footpaths and a full connection from Derrinturn to Carbury is also on the local community’s agenda.

Paul also believes more bins are needed in the locality with just six installed at present.

There is also a plan to have another clean up later this year to keep on top of the fly tipping and dumping. Long after lockdown is over, It’s clear the people of Carbury intend to look after their locality the best they can.

Meanwhile, last month Senator Mark Wall brought a Bill to the Seanad which would allow the use of CCTV in prosecution of offences relating to illegal dumping.

“This Bill would allow the use of CCTV by our local authorities to facilitate the prevention, investigation, detection and prosecution of an offence of illegal dumping. There can be no doubt that CCTV can be and is one of the most effective tools in the fight against the blight of illegal dumping.

“The figures involved in the clean-up of this vandalism are mind blowing. Local authorities in Kildare, Meath and South Dublin alone are spending an average of €3 million a year on clean ups.”

He also highlighted the amount of work volunteers carry out.