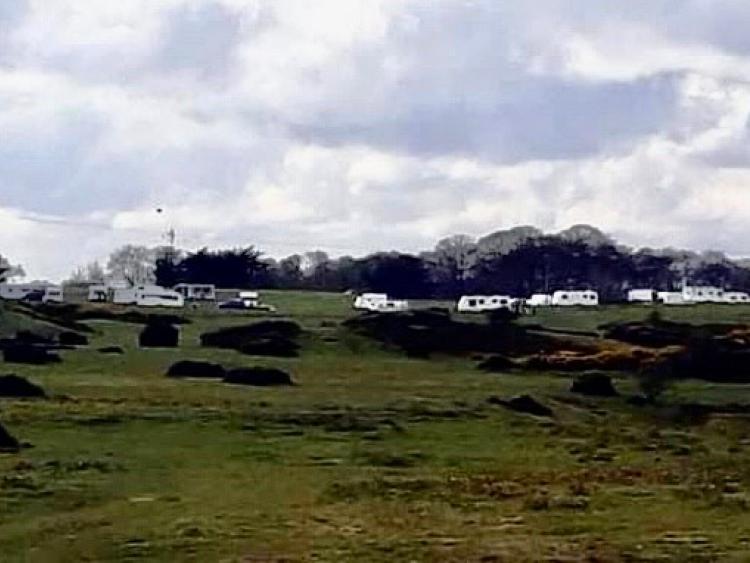 Part of the encampment on the Curragh last week

Details have emerged of an extensive policing operation put in place by local gardaí when up to 30 caravans arrived at the Sunnyhill / Ballysax area of the Curragh on Wednesday of last week.

The following morning, teams of gardaí from the Kildare Garda District took the details of residents of the encampment and officially served notices on them to leave the area.

It's understood that all the residents of the encampment had come from the Co Offaly area.

Rolling garda checkpoints were mounted in the Sunnyhill area over the following days under Public Health Regulations as part of Covid-19 restrictions.

On-the-spot fines were issued to encampment residents where it was deemed necessary.

A further garda operation took place at the encampment on Monday morning and all the caravans moved from the area.

A Garda spokesman said that files will be sent to the DPP on the issue.

Locals in the area complained about illegal dumping in the area of the encampment following the departure of the caravans.

The dumped material consisted of household rubbish as well as construction and garden waste and larger plastic and steel items.

Some of the rubbish was stuffed into plastic bags.

"In supporting the Covid-19 public health guidelines and regulations, An Garda Síochána has and will continue to adopt, a graduated policing response based on its tradition of policing by consent. This has seen Gardaí engage, educate, encourage and, as a last resort, enforce.

"Where Gardaí identify potential breaches of the public health regulations a file is prepared for the DPP in each case or a Fixed Payment Notice is issued where appropriate."

Almost a year ago, dozens of caravans were located at the Kildare town side of the Curragh Plains for almost two months.

Gardaí and the Department of Defence said they were unable to move on the encampment as the area was deemed an official residence under Covid-19 lockdown rules.