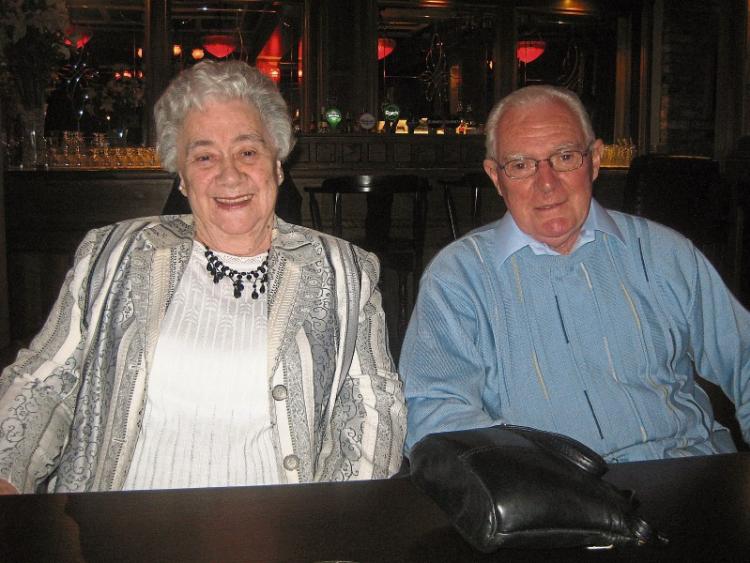 The late Anna Kane and her husband Michael

Anna Kane, nee Hogan, St Conleth’s Place, was just 12 days before her 90th birthday when she died peacefully at Naas General Hospital. Wife to Micheal for 63 years, mother to nine children and grandmother to 17, Anna made a significant contribution to the community of Naas in her long and fruitful life.

After the death of her father she, along with her mother Annie and younger brother Eddie moved back to Naas to avail of the large Higgins support network (who are too numerous to mention).

Growing up in Naas as the niece of Kildare footballing legend and double All-Ireland senior football medal winner Jack Higgins and the sister of rising Kildare football star Eddie Hogan, it might have been easy for her to be overshadowed by the exploits of other family members.

On the contrary, her warm, friendly and generous personality allowed her to make many friends easily. She met her husband, Micheal, a young printer in the Leinster Leader and they married in 1957.

As a young adult she learned her bookkeeping trade in Odlums Mills, Sallins, which gave her skills such as shrewd financial planning, attention to detail and discipline.

These were attributes that she would put to good use in managing a household with nine children and three adults all living under the one roof. Anna’s mother, Annie lived with them until her death in 1982. Shortly after this, Micheal’s father George (also a well-known face around Naas) became invalided and so joined the household in St Conleth’s Place, where he was cared for until his death in 1993.

Anna’s sense of caring and kindness was not confined to her own household. At different stages of her life she dedicated her time to many local causes including the parish development fund, ICA, SVP and the St Joseph’s Young Priests Society to name but a few.

She was a dedicated attendee at local masses and novenas, spreading herself thin between the three churches.

But she was probably best known for her work with Naas Credit Union, something which she was most proud of. Here Anna got the opportunity to combine her flair for figures with her immense capacity for helping people. This work allowed her to interact with the community and to make a difference to their lives.

Anna was an old school lady and she would manage the limited resources she had with precision. She paid her bills on time and she was loyal to local suppliers — Keenans and Coughlans for clothing, Birdie Fay in McKiernans for groceries, Bradleys for milk and Paddy Fitzgerald for coal. Her name was always good.

And, somehow the inevitable arrival of the rainy day was always taken into the consideration. Her rare treats included a bun in Hanrahans or Malones with friends like Kathleen Doyle or Kitty McCarthy. She formed a close friendship with ‘the golden girls’, Anne Kennedy, Nancy Clarke and Agnes Moore. All the aforementioned were cut from the same cloth as Anna. ‘Influencers’ all, if the language of today’s world is to be employed.

Anna’s main focus was always her family and even when life served up heartache, such as the death of her eldest son, David, her brother, Eddie or her grandchild, Siobhán, she never let herself get distracted.

With her unshakable faith she continued raising her family and ensured they were shown the correct path.

When her own children found their feet she turned her attention to her grandchildren and they were smothered with the warmth, kindness and generosity that she was associated with.

Anna ran an open door policy at home where everyone was fed and given a bed if necessary. Her capacity to pull off the ‘loaves and the fishes’ miracle for unexpected guests was her speciality.

Anna will be missed by her family in Naas, New York and Manchester and her wide circle of friends.

However they are aware that they have been part of a very special journey and the current sadness will soon be replaced by a huge sense of pride.