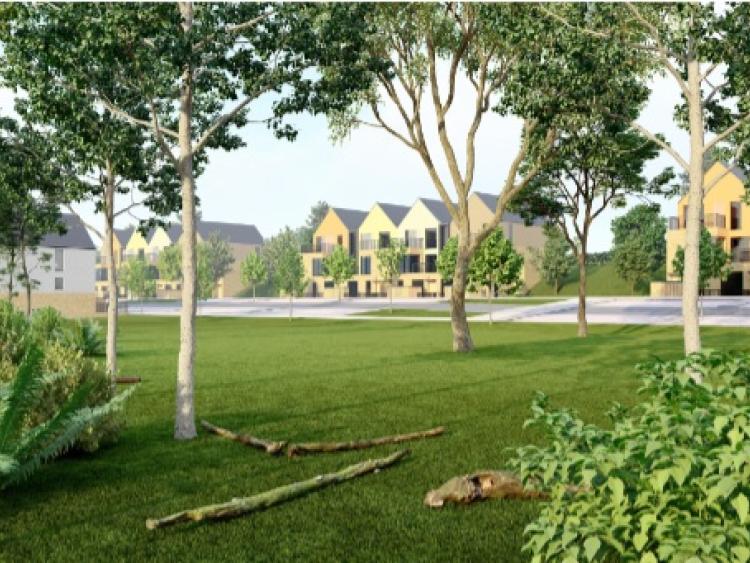 Photo impression of what the new development would look like

Plans for a €12 million Athy housing development comprising 72 homes have been lodged with Kildare County Council.

Orchard County Residential Estates (OCRE) want to build the residential development at the Carlow Road, Athy (opposite Coneyborrow). It says the project will create 50 jobs if approved.

The company points out that Ronan Lyons states, in his latest Daft.ie report, that rents in Kildare increased
by 4.7% in the last quarter of 2020 to €1,412 on average, making it the most expensive county to live in
outside of Dublin.

"Despite National Policy Frameworks 2040 setting an objective of delivering 30% of all new homes in targeted settlements, there has only been 172 new build units developed in Athy between 2017 and 2020. Athy is considered a self sustaining town
and has seen an 82% increase in population between 1996 and 2016 - much greater than Dublin and Kildare County. Athy has a 2% vacancy rate, and the shortage of housing stock is putting upward pressure on rents," says the company.

The new development, known as Aesford, which consists of a mix of one, two, three and four bedroom homes also includes a four acre riparian open space/biodiversity park, two acres of amenity space and a playground/cycle lane.

Darren McKinley, MD of Orchard County comments that "with funding already in place, a green light from Kildare County Council will pave the way for a €12m investment in Athy and create 50 jobs during a two year construction."

He says the housing units would be delivered at the same time as the completion of the new Athy Southern Distributor Road.

The company points out a previous application by OCRE was refused on issues related to flood risk and roads.

Its says the new application has addressed the road issue by having a single access point and there will be no development works within the 1,000 year flood risk zone. An independent Ecology, environmental and flood risk report has been submitted with the application.

It believes local architect Vivian Cummins and engineer Cormac Dooley have delivered a design that complements the town and local area.