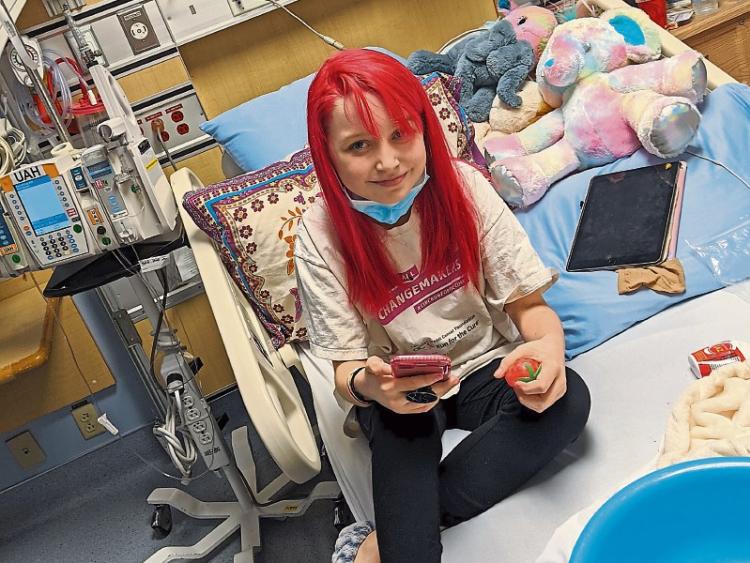 A fundraising campaign has begun for the young daughter of a Naas couple who are living in Canada.

Andrew and Trina Gill, are making plans to pay for the future treatment required by Ellie, aged 11, who has been diagnosed with leukaemia.

The couple, who are both aged 35, moved to Alberta in Canada over six years ago, and are now facing a big challenge in the weeks and months ahead.

Trina said: “It’s not news you ever expect as a parent and it has really been a surreal few months.

“Ellie was diagnosed with high risk acute lymphoblastic leukaemia on February 2, after a trip to the emergency room with really bad hip pain.”

The official diagnosis was given to the family three years later after further tests.

Ellie has already had four doses of chemotherapy via her IVAD device which sits under her skin and she has also been given chemo directly into her spinal fluid on the two occasions she has had to have a lumbar punch.

Ellie has also had three blood transfusions and three platelet transfusions in the short time since her diagnosis.

Mum Trina said: “We spent 11 days in the pediatric oncology department as inpatient and she was discharged on Friday 12 February.

“She’s currently on a heavy dose of steroids, an antibiotic and pills for nerve pain caused by the chemo.

“As for her treatment plan, we’re still in the induction phase until March 5, then she will have another bone marrow sample and lumbar punch, at that point we hope that she’ll be in remission and we can move on to the consolidation part of treatment.

“This one lasts about six months and during this time they’ll heavily treat her with chemo and hope that the blast cells don’t return.

“We will then finally hope for maintenance at the end of the six months.

“The treatment required takes a minimum of two years.

“The only upside to what she has is that it’s fully curable. After five years leukaemia free she will be classed as cured.

“There is very few cancers that are curable so we are very grateful for the fact that hers is.”

The Kearns have three other children aged three, eight and 18.

Andrew works away from home from September to April, usually working for 10 days at a time and then home for four days.

Trina added: “I had recently returned to work part time as the kids are getting older.

“But obviously with Ellie’s diagnosis we both took a leave of absence from work to care for her and our other children.

“We don’t have any other family out here but we’re lucky that we have some great friends that have been a great support to us.

“We actually dyed her hair in the hospital as she’s always wanted it fully coloured but I always said no.

“She has already started to lose her hair from chemo so we’re taking her to the hairdressers to have to cut short before she shaves it, all of which she wants.

“She’s so upset over it falling out. She’s an 11 year old girl so you can imagine the emotions of it all for her.

“As if this all wasn’t bad enough but it’s also causing her hair to fall out.”

A Gofundme account set up by friends has already raised several thousand euro. The appeal says: “After an already stressful year dealing with Covid-19,

“Ellie has been pulled out of Grade 6 to start her treatment at Stollery Children’s Hospital in Edmonton. Let’s come together and help support Ellie’s parents with medical expenses that aren’t covered and help pay the bills so her parent’s don’t have to worry about work at this time.”