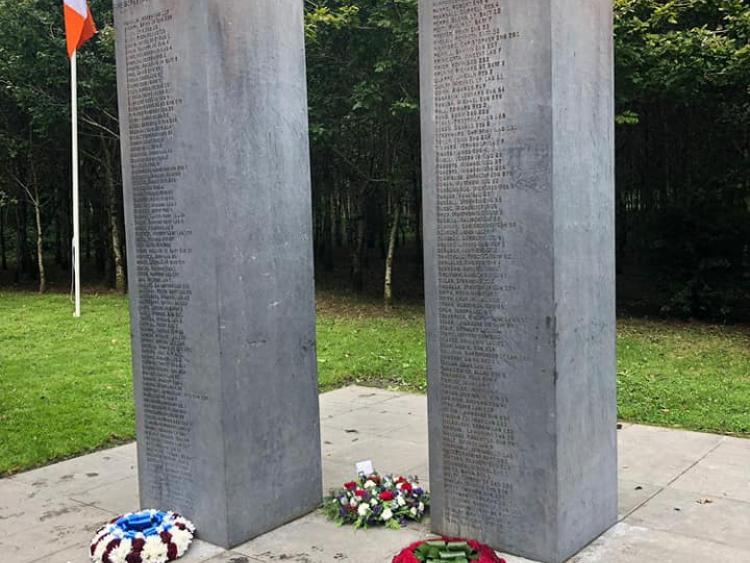 The monument features a scaled down replica of the Twin Towers

A committee behind the 9/11 Memorial at Donadea Forest Park has written to Taoiseach Micheál Martin to extend an invitation to US President Joe Biden to the site.
The Memorial marks the terrorist atrocity caused when jets piloted by al-Qaeda terrorists crashed into the famous 110-story skyscrapers on September 11, 2001 killing nearly 3,000 people and causing outrage across the world.
Morna Hosey of the Donadea 9/11 Memorial Committee said the Committee has written to the Taoiseach asking him to invite Mr Biden to Donadea Forest Park during a future state visit.
Morna told the Leader: “The Memorial is the only type of its kind outside the US and has been visited by representatives of the US Embassy in the past.
“It is visited by thousands of people every year, including many US tourists who find it very poignant.”
Morna has also invited a Kildare-based relative of Mr Biden — Brenda Blewitt, whose dad is a third cousin of the US president.

A native of Co Mayo, Brenda lives near Kildare town with her husband and two children.

The Memorial is a scaled down replica of the Twin Towers, carved from blocks of limestone and carries the names of all the men and women of the New York Fire Department, police officers and Port Authority officials who died in the tragedy.

Unveiled
The Memorial was unveiled and dedicated on September 21 2003 in a ceremony led by then Mayor of County Kildare, Councillor Michael Fitzpatrick.
The ceremony was attended by a large gathering of people including many from the New York emergency and rescue services, as well as other dignitaries, all of whom paid tribute to those who lost their lives.