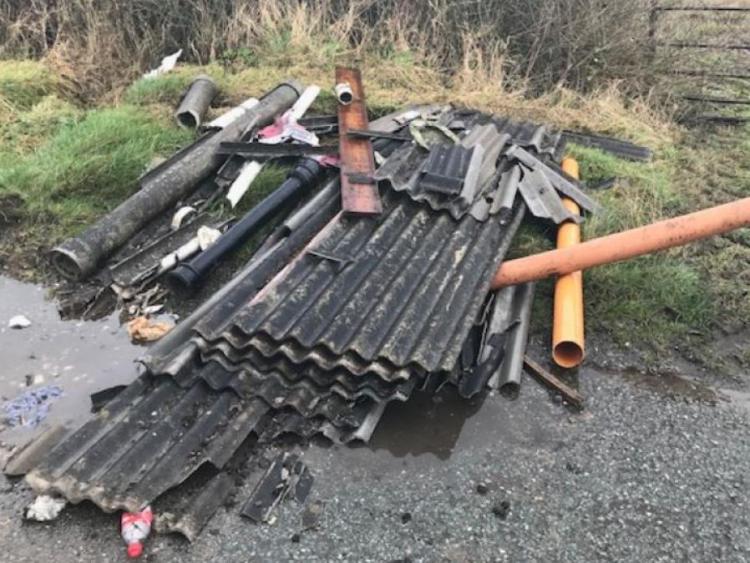 The sheets of asbestos at the scene

Locals in the Sallins area were shocked this week after a load of potentially dangerous asbestos sheeting was dumped near Digby Bridge.
It's believed the hazardous material was deposited on the side of the road on Friday night or the early hours of Saturday morning as community members had cleaned up the area in the days previously.
Local gardaí are investigating.
Asbestos can cause lung cancer, scarring of the lung tissue and cancer of the lining of the chest and the lining of the abdominal cavity.
Removing or transporting asbestos-containing material is a complex procedure and must only be done by a specialist contractor.
The latest incident of illegal dumping follows other recent examples when a TV and a three-seater sofa was thrown into the Canal nearby.
Local resident Jim Mulvany said people were shocked and angry at the dumping of asbestos material.
He said: "It's completely unacceptable that something like this should happen in our community.
"Illegal dumping has increased massively during the Covid-19 pandemic.
"I appeal to anybody with CCTV at their home or business to check if they saw a truck carrying this material on Friday night or Saturday morning.
"Also, we are appealing to anybody who recognises this material and had hired somebody to collect it and dispose of it.”
Council officials inspected the dumped material on Saturday and plans are underway to collect it and dispose of it safely.
Meanwhile, a clean up of illegal dumping at a bog outside Kildare town last week is set to cost thousands of euro, a councillor claimed.
Cllr Suzanne Doyle condemned the activity at Kildoon Bog near Nurney and called on members of the public to help catch the culprits.
Cllr Doyle said: “Over four tonnes of illegal refuse was collected from Kildoon bog.
“In recent weeks we had a clean up in that area costing almost €3,000 of tax payers money.
“I am appealing to people to be vigilant and if you have dash cam on your car, keep an eye out for potential illegal dumpers to report to Country Council.
“This issue is a blight on our public space, takes up an enormous use of resources of the local authority.”
The Council is dealing with up to 50 incidents of illegal dumping every week, according to Labour Senator Mark Wall who demanded greater prevention and enforcement.